Wild Men of the Woods... 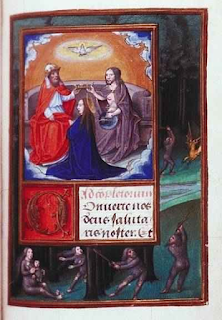 ''There were great standing stones that had been carved in the likeness of men, huge and clumsy-limbed, squatting cross-legged with their stumpy arms folded on fat bellies...The Púkel-men they [the Riders of Rohan] called them.'' The Lord of the Rings, Book V, Chapter III.

''Púkel-men'' was the name in Rohan given to the effigies of men of a vanished race of the mountains. It represents the Old English púcel (which still survives in puckle), which referred to the devil, or spirits so formidable as to be confused with the him. When Merry saw Ghân-buri-Ghân, chief of the Woses of Drúadan Forest, he was reminded of the statues on the slopes of the White Mountains, weather and age worn, shapeless but for their deep, baleful eyes. In early drafts of The Lord of the Rings (see The History of Middle-earth, vol.VIII) Tolkien had experimented with the form Hoker-men, which probably represents a Tolkienian form of the Old English hocor, ''derision,'' (Oxford English Dictionary: ''Hoker,'' n).

The Púkel-men were also called Woses. As Elfhelm says to Merry: ''You hear the Woses, the Wild Men of the Woods...'' Tolkien did not invent the word ''wose,'' (well he did, in a sense). It is derived from the Old English wudewasa, a savage, a wild man of the woods (Oxford English Dictionary: ''Woodwose,'' n; a name which appears also in Unfinished Tales, The Children of Húrin, etc), comparable to the satyrs and fauns of Classical Greek mythology, and to Silvanus, the Roman tutelary god of the woodlands. But, as with so many other philological gems in The Lord of the Rings, it is simply wudewasa as it would probably be formed in modern English had it not been forgotten. However wudewasa was used throughout the Middle Ages. Capgrave, in his Chronicles of 1460, records that: ''the Kyng of Frauns daunsed in his halle with IIII knites, and was arayed lich a wodwous.'' I'd be most surprised if the word was unfamiliar to Shakespeare. Tolkien says that the wasa element meant originally a forlorn or abandoned person, and appears in modern German waise and the Dutch wees, meaning ''orphan.'' The origin of this idea was probably the actual existence of wild men, remnants of former peoples driven out by invaders, or of outlaws living a debased and savage life in the wilderness. The word also appears in Tolkien's translation of Sir Gawain and the Green Knight. 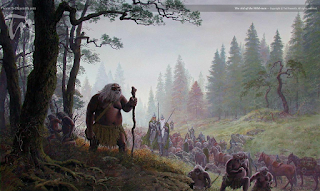 It is interesting that the Woses of Middle-earth are not evil, just ''different;'' they are disturbed by the foul smokes coming from Mordor to trouble their peace and are afright at the darkness amid the day, and they ''hate orc-folk.'' When they left the Riders in the Stonewain Valley, never to be seen again, Tolkien says that ''...to no heart in all the host came any fear that the Wild Men were unfaithful, strange and unlovely though they might appear.'' Very different from the vagabonds that haunted the woods about Bree in the latter days of the Third Age before the coming of the King to Fornost. All the Woses want is to be free, free from thralldom to Sauron, who would burn their woods and turn them out, and free from being hunted as beasts by the Men of Rohan. This idea is at variance with the patristic and mediaeval idea, such as the depiction of Nebuchadnezzar's madness and bestial life of seven years, interpreted by Origen to be a type of the fall of Lucifer; or the 13th century Celtic story Buile Shuibhne, where the pagan king of the Dál nAraidi in Ulster assaults bishop Finn and is cursed by God with madness and tramps through the woods naked. Of course the mediaeval concept of outlawry is not absent from Tolkien. Compare, for example, Túrin's sojourn among the outlaws upon his flight from Doriath. These were men who were driven out of their homes by their own people for murder, rape, theft, etc, and were therefore ''outside the law.'' Believing himself to be under Thingol's wrath, and though under a diabolical curse, Túrin's presence among the outlaws serves to better their lives, if not his own life.

Can you all see how one word, one concept can have so much meaning, so much history and so much theology in Tolkien? I find this confluence of history, familiarity and legend in Tolkien most fascinating.

Art: Ted Nasmith. The illumination is from a 14th century Book of Hours depicting the coronation of the Virgin by the Blessed Trinity. Notice the wild men in the border.
Posted by Patrick Sheridan at 7:44 pm
Email ThisBlogThis!Share to TwitterShare to FacebookShare to Pinterest