Reigning from on high... 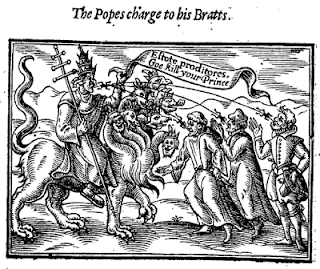 ''She has removed the royal Council, composed of the nobility of England, and has filled it with obscure men, being heretics; oppressed the followers of the Catholic faith; instituted false preachers and ministers of impiety; abolished the sacrifice of the mass, prayers, fasts, choice of meats, celibacy, and Catholic ceremonies; and has ordered that books of manifestly heretical content be propounded to the whole realm and that impious rites and institutions after the rule of Calvin, entertained and observed by herself, be also observed by her subjects.'' Pius V, Regnans in Excelsis, 25th February 1570.

So much for Anglican Patrimony; ''heretics,'' ''ministers of impiety,'' and, most sweeping of all, ''impious rites.'' What does Anglicanorum Coetibus say about the Anglican tradition? Oh yes, ''a precious gift nourishing the faith...and as a treasure to be shared.''

I found the woodcut of the pope in Google Images. Estote Proditores, ''go and be traitors to your King for daring to oppose the false religion we imposed on you for centuries.'' Succinctly spells out the good of the papacy, doesn't it?
Posted by Patrick Sheridan at 9:47 pm
Email ThisBlogThis!Share to TwitterShare to FacebookShare to Pinterest