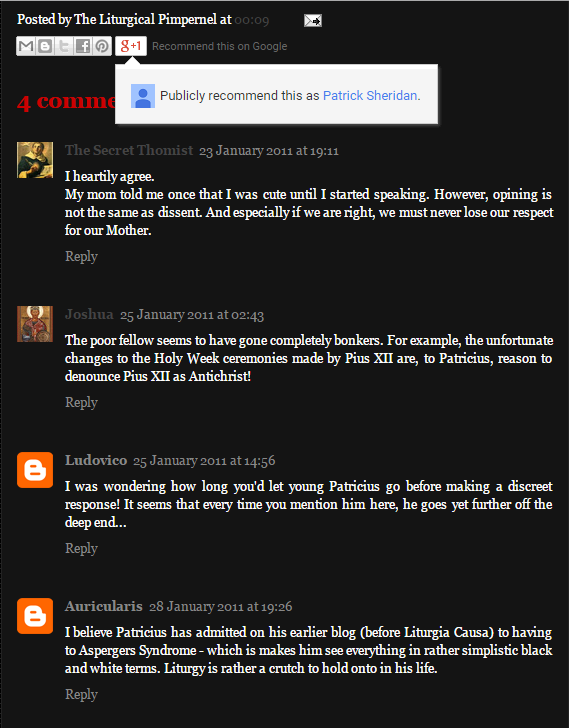 When you search "liturgiae causa" in Google Search all manner of things come up. Five years ago I was being disparaged in the Fisheaters forum (in which I am not welcome); there used also to be an Irish forum where I was recommended but I can't find that anymore; probably it was taken down. The funniest of them all, though, was when, four years ago, an anonymous American calling himself the "liturgical pimpernel" set himself up in defiance of me here with recommendations from Shawn Tribe at the New Liturgical Movement (funny that none of them plugged Liturgiae Causa in its infancy), and I think within about six months of this blog all but two people had removed their links hereto. I think they were all hoping I would just go away. Well, I'm still here as vigorous as ever.

UPDATE: A reader has sent me a private e-mail wherein he (or she) said that he (or she) remembers well the Pimpernel's "call to arms" to defend the honour of the sacred Liturgy, which the Pimpernel accused me of disparaging. I'd certainly like to find out what became of the Pimpernel. His call to arms has ostensibly made such a difference, especially now that Francis is the lord pope. Vivat papa!
Posted by Patrick Sheridan at 9:00 am
Email ThisBlogThis!Share to TwitterShare to FacebookShare to Pinterest