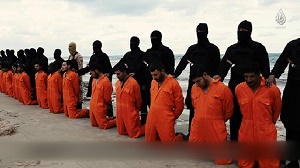 I saw this on Rorate Caeli before I went to bed last night. Twenty one Coptic Christians beheaded by the barbarous soldiery of so-called "Islamic State."

But Roman Catholics cannot pray for them. The Copts are traditionally Monophysites, going back to the days when their bishops couldn't make it to the Council of Chalcedon, and they were summarily condemned as a result as heretics. No wonder they welcomed the Arabs and large numbers of them converted to Islam! But there is a discrepancy here that I feel especially bitter about. If Roman Catholics will not venerate bl. Charles Stuart, who was martyred, just because he was an Anglican, why would they venerate these heroic Copts? Surely if they were all members of the Coptic Orthodox Church then, in the eyes of the Roman communion, they were heretics and schismatics? Why pray for them, then? If you die in schism with Rome then surely you are condemned to hell fire, the manner of your death notwithstanding. Didn't Boniface VIII say that it is absolutely neccesary for salvation to be subject to the Roman pontiff? What about the old maxim, outside the church there is no salvation?

If Roman Catholics pray for these martyrs, and even count them as martryrs, and yet do not recognise and venerate the martyrdom of bl. Charles Stuart, then they are hypocrites and publicans and may they be damned by Jesus Christ.