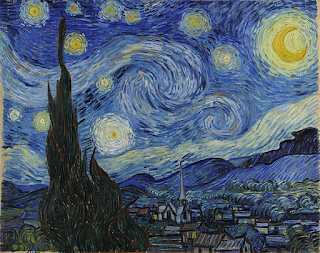 Someone suggested to me the other day that depression can inspire some of the greatest art known to man. It's true but at the time I could only think of Van Gogh and his Starry Night, famous for its swirls of intense colour upon a deep blue sky - forsooth the work of a mind in great travail. Van Gogh was not a great artist (in my opinion) but The Starry Night is a work of art, albeit one which I would not like to see before retiring.

On Friday I am going to see The Nutcracker at the Royal Opera House, which is a kind of Christmass tradition for me. My grandmother first took me in a time which seems now immeasurably remote, beyond all fateful knowledge of religion, and when hobbits, rings and elves were still new to me. I've often longed for the sensation of that first time, of discovering the works of Tolkien in a secret library somewhere, known only to me, in form as of a mediaeval Book of Hours, with the tales told in a firm, flowing hand in the most beauteous calligraphy and decked about with illustrations in Tolkien's own hand, like this dragon. 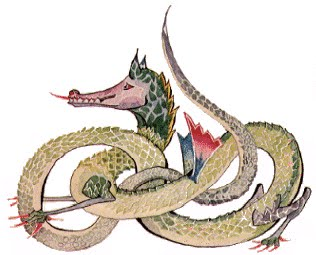 Familiarity can make even the most exquisite literature grow stale, and I first knew that something was wrong when I got bored of The Hobbit, upon taking that great work up for to read on the 75th anniversary of its publication. Anyway, coming back to The Nutcracker, which I suppose is the balletic equivalent to a Terry's Chocolate Orange, and it seems a rather puerile work; a huge Christmass tree, a kingdom of sweets and a sugar plum fairy are hardly the stuff of the most noble tradition, are they? But put that impression away which was the impression of Tchaikovsky himself when Petipa gave him the synopsis, and watch so that you can see, and listen so that you can hear. When Tchaikovsky received the commission from the Imperial Mariinsky Theatre he was depressed; sniping critics in St Petersburg, the fact that the Tsar had snubbed his latest opera, the breakdown of his disastrous marriage (well, he was homosexual), and the death of his sister, I expect all had their way with him. But his mood finds expression in the score. The music has many layers, at once lively as the Russian Dance, and melancholy as the famous pas de deux of the Sugar Plum Fairy, which all implicate the state of Tchaikovsky's great and troubled mind. While I am not familiar with Petipa's original choreography the performance at Covent Garden is always rather splendid and I think that together Tchaikovsky and Petipa produced something very sweet (no pun intended) and cheerful for the season. 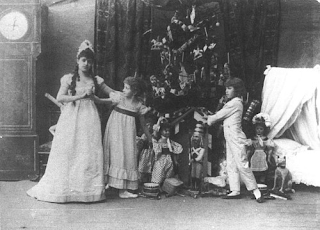 The original production of The Nutcracker at the Imperial Mariinsky Theatre, St Petersburg, Christmass, 1892.
Posted by Patrick Sheridan at 2:52 pm
Email ThisBlogThis!Share to TwitterShare to FacebookShare to Pinterest