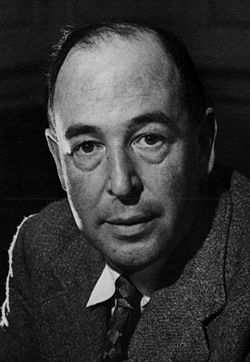 "So again I can't help wondering at the insensitivity of this scholar who, in his Inaugural Lecture 'De Descriptione Temporum,' claims to speak as a native of mediaeval England and to know 'his way about his father's house' (p.13), yet has no appreciation of her whom the people of the Middle Ages, including Dante and Chaucer, hailed as their queen and mother. Not that he has anything bad to say against her or the mediaeval devotion to her. He merely passes her over in silence. And in this silence I can't help feeling not so much reverence, or mere indifference, as suppression of a deep Protestant prejudice. For him as a Protestant the Virgin Mary has no place in 'mere Christianity,' despite the mention of her in the Apostle's Creed. Nor does he admit her to what he calls, in his Preface to Paradise Lost, 'the great central tradition' (p.92)...

"But then, considering how impressive is the development of the doctrine and cult of Our Lady in Christian history, in both the Greek and the Latin Church, not only in the MIddle Ages but well into the Renaissance and Baroque periods, any exposition of 'mere Christianity' without mention of her is bound to be Protestant, or even Puritan, and so cut off from 'the great central tradition' of the Church." (Peter Milward's A Challenge to C.S Lewis, p.61).

Many people assume that it was Lewis himself who coined the phrase "mere Christianity." Closer inspection of ecclesiastical literature reveals that the phrase is used by Richard Baxter, that eminent Puritan divine who was offered the bishopric of Hereford and turned it down, in Church-history of the Government of Bishops and Their Councils. We're all "mere Christians," but there is more to Christianity than the great central traditions and I still share Tolkien's disdain for Lewis' theological works. Lewis' personal beliefs will forever be a mystery, at least to me. He must have been a very troubled man.
Posted by Patrick Sheridan at 9:00 am
Email ThisBlogThis!Share to TwitterShare to FacebookShare to Pinterest