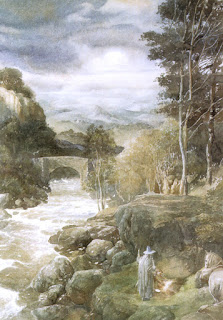 On his homeward journey from the Quest of Erebor, Bilbo went down again into Rivendell, to the Last Homely House west of the mountains. As in a monastic community, he awoke at night to the sound of the merry folk singing by moonlight, singing this merry madrigal:


Sing all ye joyful, now sing all together!
The wind's in the tree-top, the wind's in the heather;
The stars are in blossom, the moon is in flower,
And bright are the windows of Night in her tower.

Dance all ye joyful, now dance all together!
Soft is the grass, and let foot be like feather!
The river is silver, the shadows are fleeting;
Merry is May-time, and merry our meeting.

Sing we now softly, and dreams let us weave him!
Wind him in slumber and there let us leave him!
The wanderer sleepeth. Now soft be his pillow!
Lullaby! Lullaby! Alder and Willow!

Sigh no more Pine, till the wind of the morn!
Fall Moon! Dark be the land!
Hush! Hush! Oak, Ash, and Thorn!
Hushed be all water, till dawn is at hand!

It puts me in mind of Morley's famous madrigal for the month of May, which can't be right for Morley's is a song to be sung by day, not night. But that's an example of the many nonsensical connexions my mind makes at times.

Art: Alan Lee, one of the three good Tolkien illustrators; the others being Ted Nasmith, who crops up quite regularly here, and John Howe. Does anyone know of any others? There are some very strange illustrations for The Silmarillion in the David Day "Tolkien encyclopaedia" by the artist Roger Garland but they seem rather surrealist for my taste. I did once read about an heroic chap who was rendering the text of The Silmarillion into Book-of-Hours-style illuminations, which I'd like to see published, but I can't think of the man's name. Any ideas?

In the meantime, here's Morley's seasonal madrigal, out of season:

Posted by Patrick Sheridan at 9:00 am
Email ThisBlogThis!Share to TwitterShare to FacebookShare to Pinterest