Corruption of the Roman Rite... 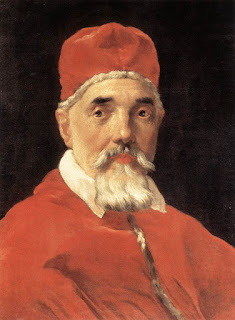 Fr Hunwicke has just posted a rather good article here on the hymns of the breviary. He says:

"Never forget that the corruption of the Roman Rite began, not with Paul VI, not with Pius XII, not even with Pius X, but when, in the 1620s, Papa Barberini aka Urban VIII mucked up the ancient Office Hymns because he wanted them to sound more like Horace. This was the first example of the Roman Catholic Church adopting the "we've-now-got-printing-so-we-can-now-impose-our-latest-revolutionary-fad-almost-overnight-on-the-Universal-Church" syndrome which ultimately led to Bugnini. Protestants like Cranmer, of course, had seen the possibilities of this technology for liturgical devastation much earlier. Back to Pius V should be the traditionalist instinct. That is why, if you want to use English translations of the original texts of the Office Hymns as given in Sarum, Pius V, and the new Liturgy of the Hours, you need to use Anglican translations - done from Sarum by people like J M Neale - rather than RC translations by scholars like E Caswall." (Emphasis my own).

Quod non fecerunt barbari, fecerunt Barberini, indubitably! With respect to Fr Hunwicke, whose deep knowledge of matters liturgical exceeds my own, I would have thought, taking my mantra from Gandalf, that "beginning" is too big a claim for anyone, particularly for any matter in the long, sad story of the Roman Rite. I agree entirely that Barberini mucked up the antient Office hymns, so did Dr Fortescue, and one of the great reforms, among many, of Vatican II was to, at least partially, put them right. But the corruption of the Roman Rite goes back much further than even Barberini. Who knows when and where? The University of Paris? Wandering beggars? The Greeks were already scandalized by the decadence of the Roman liturgy at the Council of Lyons in 1274, and by the standards of to-day that must have been magnificent! The Council of Trent almost certainly tolled the death knell of the Roman Rite.

These days I would say that traditionalists have no objections worth serious consideration to arbitrary, nonsensical changes in their rite. If the pope can add the Filioque to the Creed of his own volition, what merit does an hymn have, however venerable? Yea more, who now has anything to say about the changes to the Roman Rite during the Gregorian reforms? Indeed, who knows anything about them? The answer is no one. Those changes, long out of living memory, are completely irrelevant to our time. The corruption of the Roman Rite comes ultimately down to the position of one man, he that exalts himself in Christ's Church as opposed to those that make themselves humble: the Bishop of Rome. The zealous violence committed by a string of popes in the name of uniformity and power cannot be undone and the only thing left of the Roman Rite in 99% of Latin rite parishes is a festering, withered creature, scarcely worthy of the name "liturgy." The other 1%, the traddies, are too stupid and wicked to see the problem, even if they were interested in truth and orthopraxis.

The Roman Rite has been eviscerated over a period of centuries, not decades, and for people like me the only option left is to just look the other way.
Posted by Patrick Sheridan at 11:08 am
Email ThisBlogThis!Share to TwitterShare to FacebookShare to Pinterest