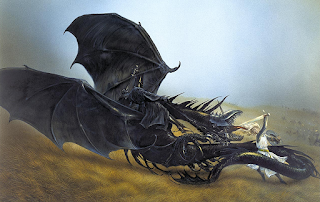 My post about necromancy was hastily concluded and published solely because I hadn't posted anything in two weeks. I plan to expand and edit it in due course. One thing I neglected to mention, which I now rue, was the significance and etymology of "dwimmerlaik," a strange word in the tongue of the Rohirrim uttered in fear and disgust by Dernhelm upon the battlefield of the Pelennor:

"'Begone, foul dwimmerlaik, lord of carrion! Leave the dead in peace!'
"A cold voice answered: 'Come not between the Nazgûl and his prey! Or he will not slay thee in thy turn. He will bear thee away to the houses of lamentation, beyond all darkness, where thy flesh shall be devoured, and thy shrivelled mind be left naked to the Lidless Eye.'" The Lord of the Rings, Book V, Chapter VI.

The command "leave the dead in peace," coming from that noble Northern spirit of the Éothéod, is most pertinent to the subject. The justly appointed masters of spirits were the "Fëanturi," brethren among the Valar. Irmo was the master of dreams and visions and Námo, Doomsman of the Valar, he that summoned the spirits of the dead to Mandos. The Lord of the Nazgûl, however, was a necromancer of Sauron's following, and necromancy, as we have seen, implies unnatural dominion over the dead. As it says in "Laws and Customs among the Eldar:"

"To call on them [spirits of the departed] is folly. To attempt to master them and to make them servants of one's own will is wickedness. Such practices are of Morgoth; and the necromancers are of the host of Sauron his servant." The History of Middle-earth, Volume 10, p224.

What the Lord of the Nazgûl was going to do with "his prey" remains, mercifully, unknown but since Théoden was captain of the field one only needs to cast one's mind back a thousand years (ahhh, where time moves in centuries!) to the fate of the last King of Gondor to get some idea. And so Dernhelm's rebuke of the Black Captain was not merely in respect of the body but of the king's eternal soul. It is therefore one of the most theologically rich in all of The Lord of the Rings; c.f Aragorn's "surprising earnestness" in Book I, Chapter XI.

So, what's in a word? As I have heard it said. For this, I recommend a libellus entitled "The Ring of Words: Tolkien and the Oxford English Dictionary," compiled by Gilliver, Marshall and Weiner. Under the entry for "dwimmerlaik," it says:

"The word is derived from the Old English stem dwimer- which is found in gedwimor 'apparition, phantom; delusion; delusive practice, witchcraft.' The suffix -layk, a northern spelling of the Old English suffix -lac, survives in modern English only in the word wedlock. (The -lock in warlock is from a different Old English root, -loga, meaning 'liar'). In Middle English the word was, it appears, mainly abstract, but Tolkien has made it a concrete noun, presumably meaning 'sorcerer.'

"The root dwimer- is seen also in the adjective dwimmer-crafty, a derivative of Old English dwimercræft (OED: dweomercræft) used by Éomer to describe Saruman (LR III.ii). It also appears in two place names, Dwimorberg (the Haunted Mountain at the rear of Dunharrow in Rohan), and Dwimordene (literally 'Vale of Illusion,' the name used in Rohan for the Elvish land of Lothlórien). It may seem remarkable that the same word is used to refer both to evil magic and to the benign power of the Elves. However, it is clear from the words of Wormtongue ('webs of deceit were ever woven in Dwimordene:' LR III. vi) that in the minds of the Rohirrim there was little distinction: both were extremely dangerous." C.f Boromir's misgivings about the Golden Wood (The Lord of the Rings, Book II, Chapter VI).*

The horror with which Dernhelm challenged the Nazgûl came naturally, and her choice of word (or should I say Tolkien's) carefully chosen. Dwimmerlaik denotes Power, which is a central theme and an ominous and sinister word in all the tales, except as ascribed to the Valar (c.f Letters. no.131), and power ill-gotten by diabolical craft. *That evil sorcery and Elven arts should become confused in the minds of latter Men is not as "superstitious" (if you like) as may at first appear. How can a man distinguish the kinds? With regard to the spirits of the dead, particularly of the Eldar (that is, those who, by violence or mishap, have become unbodied), there are those who are evil, the which seeking contact is fraught with peril (of fire and water, so says the Gospel); then there are those who linger in grief among the places of their habitation of old, whose bodily forms are seen only fitfully and dimly by those who are wise and true. These latter do not desire bodies, or power thereover, indeed they do not seek converse with Men, except rarely for the doing of some good or because they perceive in a Man's spirit a love of things antient and fair. Then they may reveal to him their forms, and he will behold their beauty. As for the unbodied, such as the Nazgûl, they have no bodies to reveal and even if it were within their power to counterfeit Elvish forms, deluding Men with lies and deceit, such visions as they could conjure would be marred by their evil intent. For the hearts of true Men are uplifted in joy to behold the true likeness of the Eldar, their antient kindred, and this joy nothing evil can counterfeit.

Art: John Howe.
Posted by Patrick Sheridan at 9:00 am
Email ThisBlogThis!Share to TwitterShare to FacebookShare to Pinterest