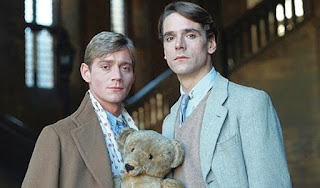 Some thoughtful reflections on Brideshead Revisited. I read Brideshead for the first time when I was 18, and I have read it only once since then; a few weeks ago in Kefalonia. All my friends like it. It leaves me cold, for the most part, if I'm perfectly frank. I have never seen the series, or the film, and I have no real affection for any of the characters, or affinity with either the university, the estate, the ship, the artist, or Venice. I have no sympathy for the kind of extravagance and depravity to which the young Charles and Sebastian stooped. Charles Ryder seems a social climber to me, and more than a bit mercenary towards the end of the novel. I certainly found reading Jasper's counsel in chapter I about the subtleties of the social graces and conventions at the university jarring, but maybe that's because I never went to Oxford and never once went into the JCR at Heythrop? Call me a philistine but I have never made any attempt to keep up appearances: what you see is what you get. Some have compared me with Sebastian Flyte over the years, which, like my parents saying that my sister and me are very much alike, I just do not see. Anthony Blanche (who is not mentioned in the critique) seems a despicable caricature of a homosexual, as catty and as camp as can be. Brideshead himself is a bore. In fact, of all the characters in Brideshead the one I like most, and I don't much like him, is Charles' eccentric father. Maybe that's because his waspish and scarcely concealed polite contempt reminds me so much of my mother?

Maybe this is Waugh's understanding of the operations of divine grace among this group of undeserving incorrigibles but I have never understood Charles' conversion to Popery at the end. He seemed so convinced of its vanity and spuriousness throughout the novel (c.f the rather moving deathbed of Lord Marchmain) that his seeming conversion comes across as inextricably linked up with his, what would you call it, "missed opportunity" with Julia? Although maybe that's the whole point and that, thick as I am, I just don't get it.

But it's as I said recently about the privileged and aristocratic. They don't deserve happiness; misery and hellfire is the price they pay for their wealth and, in Charles' case, libertinism. And poor old Sebastian! No, my overall opinion of Brideshead is that it's all vanity. It is good literature but it's a nasty work.
Posted by Patrick Sheridan at 2:30 pm
Email ThisBlogThis!Share to TwitterShare to FacebookShare to Pinterest