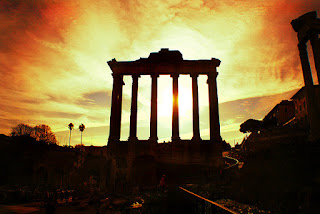 Fr Hunwicke has started an interesting series on the worship of the Anglo-Saxon Church, with reference to a new book in the subsidia series of the Henry Bradshaw Society. He writes: "If there was one single over-riding characteristic of Anglo-Saxon Christianity, it was its Romanitas." I agree. It is beyond dispute. The affection of the Church of England for the Church of Rome down to the eleventh century was unmatched anywhere in Christendom. No other kingdom paid Romepenny (or "Peter's Pence"), and the old English liturgy was based for the most part on the Ordines Romani, with some monastic and Frankish influence (such as the Rogations processions, unknown in the old Roman liturgy). But the Church of England was very old-fashioned. While English churchmen stimulated the Carolingian renaissance in the Frankish Empire, and benefited therefrom, they were generally suspicious of reform and change, clinging to the insular traditions, many of which went back to the time of Sts Augustine and Theodore.

What were these insular traditions, then? Well, before the many pestilential reforms imposed by the Normans in the 1070's, the Church of England used the old Roman Psalter; never abandoning it in favour of the Gallican or Vulgate editions. The English liturgical Bible was similar to the Vetus Latina, preserved in long tradition against the encroachments of the Vulgate. The Church of England was very monastic, as opposed to the Church in Normandy; the sees of Canterbury and Winchester were monastic by tradition. Most English bishops were monks, as in the Orthodox Church to-day, and the Benedictine Office was sung in most cathedrals. The church canons were very different, and there was no separate ecclesiastical court. The penitential and dietary laws were preserved in tradition from the time of the Roman missions, which were again different to those of the Normans and therefore in need of "reform." The liturgical kalendars of the English churches were different to those of the Normans, with memorials of the Roman martyrs, keeping the feast of the Conception of the Mother of God in December and her Oblation in the Temple on 21st November (no doubt the influence of the Greek monasteries of Southern Italy); the feast of St Dunstan, and many English saints beside - all suppressed by Lanfranc. The rich and pious heritage of vernacular literature roused the contempt of the Normans. The Church of England even preserved an older tradition of plainsong where the Normans used the reformed chant of William of Dijon. William of Malmesbury has it that the monks of Glastonbury refused to accept the reformed chant because "they had grown up in the practice of the Roman Church [!]."

This latter point is the most important. As I have said, reverence for the Church of Rome in England was unfeigned. Any casual reader of St Bede can see that. The dedication of many churches to Sts Peter and Paul (such as Westminster Abbey) was a memorial of the filial relationship of England with Rome, the Mother Church, as was the Romepenny. Many nobles went on pilgrimage to Rome, most famously St Alfred the Great. The English liturgy was in Latin. But the Romanitas of the Church of England ere the Conquest was not identical with the Ultramontanism of 19th century English prelates like Cardinal Manning, or the exaggerations endemic in Abbot Gasquet's history of the Church in England. Seen in terms of traditionalism, the Romanitas of the English was surely virtuous. And there were no papalists in England before the Conquest. The Gregorian Revolution, the evolution of the Papacy into an ambitious and political force in Europe, &c were continental and had neither sympathy in the English episcopate nor with the King, especially with the appointment, by St Edward the Confessor himself, of Stigand to the holy See of Canterbury. It's possible that the English preferred the old corrupt popes of the tenth century to the meddling feudal types on the eve of the Conquest. Give me a remote John XII over an interfering Gregory VII any day! Even William the Bastard never aligned himself completely with the reforming papacy. But the support given by the Papacy to William's conquest of England, ostensibly to rid the Church of England of pluralism, simony and other abuses and to regulate the church in line with the reforming principles, is telling. The Norman Conquest was ruthless and completely successful, and it changed everything; culturally, linguistically, legally, and ecclesiastically. It is perfectly true to say that the Church of England, of England mind you, was steeped in Romanitas, but it had remained largely unchanged from the time of the Roman missions because, and this is my earnest belief, the English were Orthodox. What Lanfranc, who called himself a novus Anglus, brought with him was new. Rome had ceased to be what she was, and the Normans marched under a papal banner.


The writ of the Bishop of Rome runneth not in England.
Posted by Patrick Sheridan at 9:00 am
Email ThisBlogThis!Share to TwitterShare to FacebookShare to Pinterest