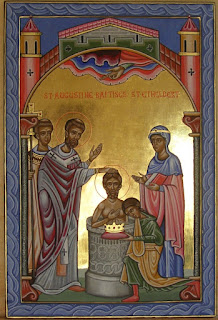 Already my new blog has attracted some controversy! It seems that my use of the term "Church of England" to designate that part of Christendom on English soil before the Reformation is objectionable to some. But I fail to see why. Ecclesia Anglicana is a term that appears in Magna Carta and means simply the Church of England. Moreover, the Church of England was always conceived of in broadly national terms, a characterisation that was never lost during the centuries between the Conquest and the Reformation when clergy and laity were subject, de iure, to the Bishop of Rome. But clergy and laity were also subject, de iure and de facto, to the Crown. The Church of Rome, that is the Church of the city and diocese of Rome, was held in the greatest esteem as the prime See in Christendom by the English. Her bishop they acknowledged as the successor of St Peter and keeper of the awful keys with feelings either of devotion or disgust, depending upon the occupant. One can hardly blame an Englishman of the Hundred Years War holding a French pope in Avignon in some suspicion. But the English were not "Roman Catholics," and certainly did not belong to a "Roman Catholic Church." What on earth does that mean? It's an anachronism and would have had no meaning to anyone in Christendom, whether in the Ecclesia Gallicana, the Ecclesia Hispanica or the Ecclesia Romana.

Englishmen were members rather of the Church of England, and the English Church had her own rights and privileges, her own hierarchy, her own system of sacred canons, her own venerable liturgy, her own law-courts and legislatures, all distinct in many respects from the customs of the Roman Church. I am not suggesting that Englishmen were not in communion with Rome, I am merely pointing out that to speak of the Church in England before the Reformation in terms of Ultramontane ecclesiology is a weird anachronism and the reflection of a later, more lurid conception of ecclesiastical history.

Therefore it is perfectly acceptable to speak of the Church of England, as distinct from the Protestant Anglican Church, before the Reformation. As to the date the Church of England was founded, please do not stupidly propound a few 16th century dates or Acts of Parliament. The Church of England was founded in the 6th century by our father in faith St Augustine who established the old See of Canterbury. Any contrary view is stupid and prejudiced.
Posted by Patrick Sheridan at 3:33 pm
Email ThisBlogThis!Share to TwitterShare to FacebookShare to Pinterest