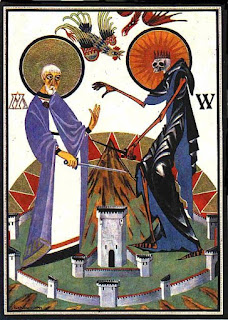 Thanks to reader "Tom" for informing me of these. They're from a 1993 Russian edition of The Lord of the Rings, by the artist S. Juchimov. I rather like them. The one depicting Gandalf and the Lord of the Nine Riders (above) could have been inspired by the mediaeval leitmotif of the three living and the three dead (see here), a judgement one can make by their postures and contrast. 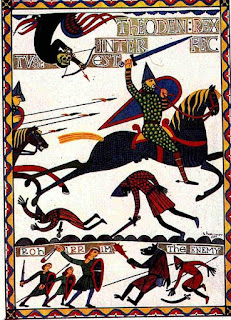 Clearly inspired by the Bayeux Tapestry. Theoden Rex interfectus est. It captures one of the most heart-rending scenes from the book, in which Théoden is described as Oromë the Great in the impetuosity of his wrath as he rode to the defence of the city of the Númenóreans to be shot at by an evil arrow from the dark. 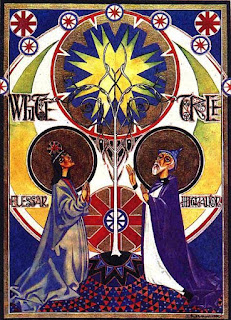 This is clearly the Invention of the White Tree in the snowy heights of Mindolluin by Elessar and Mithrandir. Just as the True Cross was carried in triumph into Constantinople by the Emperor of the Romans, so the sapling of the new tree was borne into Minas Anor by the King of the Númenóreans in memory of the old. This painting could almost be an icon of Christ's Transfiguration. 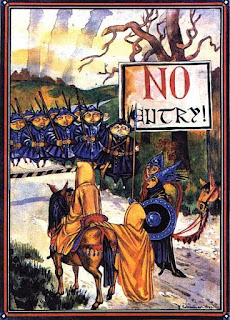 I don't know about the yellow and black barrier but at least Pippin's helm is accurate, being the winged helm of the Guards of the Citadel of Gondor. Who could tell, upon first reading, that the War of the Ring would have ended upon the very doorstep of Bag End?

It's encouraging to see Tolkien's work rendered into these illuminations. It's as I have imagined them for years.
Posted by Patrick Sheridan at 11:11 am
Email ThisBlogThis!Share to TwitterShare to FacebookShare to Pinterest