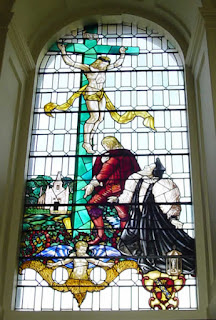 I found a charming and informative article on Little Gidding here. A sample:

"They restored the abandoned little Church of Saint John the Evangelist for their use. The household always had someone at prayer and had a regular routine. They read the daily offices of the Book of Common Prayer and also read the complete Psalms each day. Day and night, there was always at least one member of the community kneeling in prayer before the altar so that they might keep the word, “Pray without ceasing.”

"They fasted with great rigour, and in other ways embraced voluntary poverty, so that they might have as much money as possible for the relief of the poor. The life of the Ferrar household was strongly criticised by Puritans, and the community was condemned by William Prynne in a series of scurrilous pamphlets as “an Arminian Nunnery.” However, the family never lived a formal religious life at Little Gidding; instead, this was a family living a Christian life in accordance with the Book of Common Prayer and according to High Church principles."

I think in these latter days all Christian families are called to something like Little Gidding. If thou wilt be perfect, and so on. As for me, I am reclusive enough. I just need to find a comfortable job that pays well enough and doesn't make unreasonable demands upon my time and energy. But does that even exist? I've been told that employers don't like it when you say that you won't work on Sundays.
Posted by Patrick Sheridan at 9:00 am
Email ThisBlogThis!Share to TwitterShare to FacebookShare to Pinterest