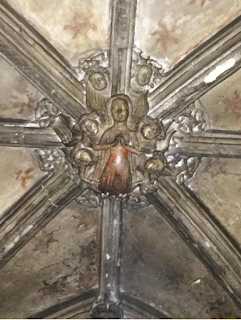 This is a charming relief of St Mary's Assumption on the ceiling of the old Pew Chapel of Westminster Abbey, dating from the 1380's. Perhaps the vile soldiery of Parliament, who generally wrecked the church during the sad and long exile both of the Church and King, didn't realise it was there? Nevertheless it is one of many examples of the Church of England looking after a tradition where Rome cheaply discards it. I can imagine processions thereto after the Magna Missa and Vespers during the Octave (yes...those), anthems and antiphons to Our Blessed Lady, in the glorious days of England's piety. These days the relief is only acknowledged by the odd tourist who looks up and the Pew Society which celebrates a Mass in honour of Our Lady of Westminster once a year, sadly after Evensong. It's encouraging that at least this poignant icon of so beautiful a Lady has never been dishonoured with Signum Magnum.
Posted by Patrick Sheridan at 9:00 am
Email ThisBlogThis!Share to TwitterShare to FacebookShare to Pinterest