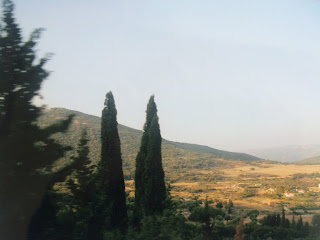 This is a valley outside Frikes.

I was tempted to say of Kefalonia and Ithaca quod scripsi, scripsi. When I wrote my piece these two weeks ago I thought I could say no more, despite calls for photographs and stories. By the standards of to-day I am not well-travelled. I had been to Greece once before in my life, to Corfu in 1993. I was five years old. I have been to France, Belgium, through the Netherlands to Germany, Italy (not counting my brief stay in Rome - fortunately the unholy father was on another continent!), and once to Canada when I was eight. And Ireland was for much of my childhood a second home. But I hadn't been abroad since 2011. My old friend Nina used to go away almost every weekend on mini trips to the Netherlands, France and sometimes Berlin. When she was a dancer on cruise ships she saw the world and developed a taste for travelling. But it wasn't for me. The Baggins in me always ruled the Took. And to be frank I look at most people who travel incessantly with disdain. Maybe it's pent up envy about their seeming inexhaustible wealth and my own penury, or their courage as opposed to my fear. I don't like being far from my home. That's the trouble with social networking sites, and one reason I left Facebook. People narrate their lives with such things as "off to Turkey for two weeks, look out for photos," or, "a nice brace of lobsters for supper, and champagne," and never mind about the have-nots. And when these people go overseas what do they do? They hang around beaches and clubs. Why not do that in Blackpool, or Brighton, and be surrounded by the scum of the earth there? And such is their arrogance that they make no effort to learn the regional language. Perhaps my Anglo-Saxon countenance gave it away but I had many times to interject with the Greeks when they spoke to me first in English, but they were delighted at my halting attempts at modern Greek. There were too many English people in Kefalonia (not so in Ithaca, which was one reason I loved it so). A scouse woman at an adjacent table in a cafe in Argostoli addressed the waiter as "signor." I felt like punching her in the tits. But perhaps, as my parents would say, I am just "intolerant." 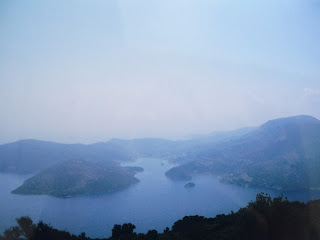 That is the view of Vathy from the belfry of Kathara Monastery. The small island in the bay is the place from which, in the old Greek rite, the bishop blesses the sea on Theophany Even. I'd like to see that.

My two days in Ithaca I shall cherish to my dying day. I saw no European flag flying there, there were no English, and everything felt old, notwithstanding the earthquake that destroyed much of the islands in 1953. The cathedral in Vathy had the most beautiful iconostasis I have seen in many a year, five panels gilt and richly carved and gleaming in dull gold in the midday sun that came down in slender beams from the windows, with Christ Pantokrator in majesty, albeit dim with the years, over the royal doors. Standing upright upon the cathedra of the church was a crimson cushion on which was traced in gold thread the Byzantine double-headed eagle. I crossed myself thrice with a prayer for our most devout Emperor, wherever he may be, and went to refresh myself with some peach juice. I took the bus to Kioni. How the roads twist and turn the higher you go up into the hills! It was rather disconcerting to see a rusted car wreck among the bushes just off the roadside and I found out later that if you did indeed have some accident on the roads in this wilderness you will die. There is no hospital on Ithaca and, while there are a few helipads dotted about the island, I don't suppose holiday makers are missed or expected anywhere in the towns. I made sure to tip the bus driver when I disembarked!

The next morning, in Kioni, after breakfast I walked up the hill through the town and saw two little green lizards basking on a stone wall among the olive leaves. I'm not a herpetologist but being small, slender and very quick to scuttle off at the sound of one of the big people making a noise like elephants I guess they were a species of European rock lizard. Past the watering trough (full of shrubs, unfortunately - the place wasn't that old!) into the hills I wandered by the road side and looked about me at a landscape immeasurably remote, wild and beautiful. Only once in my life have I felt so blissfully alone; at the tip of Malin Head in Co. Donegal at a time of winter looking west over the Atlantic. But here the air was clean and fragrant, not keen and salty; as I imagined the air of Númenor to have been in the days when the King lead the people in procession to the holy mountain. I felt as Samwise did as he laughed for heart's ease in the fair region of Ithilien, but I felt less like a hobbit as like an Ent tramping in the quiet of the world, even as Treebeard himself in the willow meads of Tasarinan in a spring time long ago. I too took a deep breath and filled my soul with the lavender and thyme that grew there. I picked a lime from a tree and followed the road back to the village. I had to return to Kefalonia at lunch time. 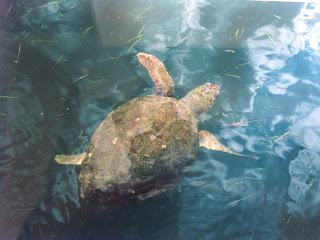 One of the loggerhead sea turtles in Argostoli. Notice the barnacles on its back. How old would you say it is?

A small tour group arrived in Kioni and I had arranged to join them back to the ferry to Sami the previous day. Meanwhile it was lunch time and there was an hour to spare so I walked down hill (it was all down hill) to the restaurant by the pebble beach where I had breakfast in the morning. There were small dinghy boats anchored in the bay, and a local man snorkeling. The sea washed up about two feet from the terrace; it was an ideal place to eat in the summer. Three girls from the tour group sat at an adjacent table. I gathered from listening to their conversation that they'd only just met. I hoped that they'd include me in their congenialities because, against my will, I began to feel lonely but they only seemed to look my way when I spoke in Greek to the waiter. Oh well. 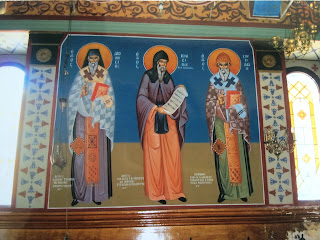 A mural in Kathara Monastery depicting Sts Dionysius of Zakynthos (right), Gerasimos of Kefalonia (middle), and Spyridon of Corfu (right). Paron saints of the Ionian Isles.

After lunch it was back to the ferry, back to Sami, back to Kefalonia. It seemed, strangely, the end of a dream. I could see the ferry from the port but it was about twenty minutes away so I went and sat by the water in the shadiest place I could find (the heat was incredible). Overcome with weariness, I fell asleep on the bus and awoke as we were just across the sea from Argostoli. I walked down the hill to my hotel full of Greece that afternoon, which is something that cannot be described in literature. Still my mind wanders among the cypress trees and the shallows of the Ionian Sea. And I wonder: do people who go overseas to get drunk around thoroughly-English clubs and pubs come away with so rich an experience? If not, why bother going?

A note on the photographs. I had them developed at the Boots chemist in Crayford. They were taken on my mother's modest "Canon," which I borrowed for the trip, and since she also paid for their development not all of them were printed. These are in fact photos of the photographs as I could think of no other way to upload them, so please forgive the quality. I did my best.
Posted by Patrick Sheridan at 10:00 am
Email ThisBlogThis!Share to TwitterShare to FacebookShare to Pinterest