When I first went to university these nine years ago I was in a very fragile state, although I didn't know it at the time. I had become bored with full-time education and I had wanted to take some sort of "gap year," but my mother forbade this so I went straight from sixth form college to university. I was offered a conditional place at Exeter College, Oxford to read History. I turned it down to read Divinity at Heythrop instead, a mistake so grave that not a day goes by that I don't regret it. It was a combination of stupidity, vanity and desperation. Stupid in turning down a place at the most prestigious university in the United Kingdom; vain in that I thought that "Divinity" sounded far grander than "Arts," and Divinity being a postgraduate degree in some institutions, I thought that this would, in some way, work to my advantage; and desperate in the sense that even if I were inclined to go to Oxford, I was by no means ready to leave home. I had the wherewithal to leave home then, but not the maturity. Now that I have the maturity (and earnest desire), I lack the wherewithal.

When I went to Heythrop I spent most of my time in the Theology Library in the "stacks" reading old editions of Martinucci and Le Vavasseur, diocesan and religious liturgical books, old collections of letters, some Latin literature. I never went into the JCR. I had almost nothing in common with my fellow Divinity students, all of whom were seminarians. I was the baby, by at least eight years. I was the only traditionalist. I went to the college Mass only once. As such I took to solitude and the books like a duck to ducks. In addition, I was living at home with my belligerent, unpredictable and volatile sister. Two hours on the train there, two hours back. I seldom worked at home because I had no privacy, or peace and quiet. At college I was too distracted by my liturgical interests to focus much on the work, much of which I found tedious. The combination of stress, adjusting to the rigours of academic study, new people, the travel, my sense of having no rest at all (I was working part-time at Morrisons, again at the insistence of my mother), the domestic situation, the unfinished essays piling up, &c eventually led to some sort of mental breakdown. I ended up at a crisis unit at Queen Mary's Hospital. I was discharged after spending the night there and referred to an outpatient clinic for treatment for "undifferentiated psychosis." I dropped out of Heythrop, needless to say without telling anyone, and kept up the pretence of going for as long as I could. In those days I was still comfortably well off and could spend days in London and elsewhere without hurting my bank balance (I had a black card in those days too). 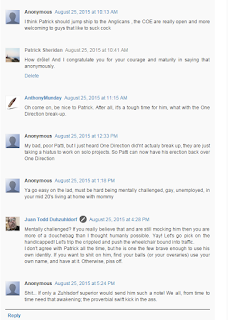 Another reason "AnthonyMunday" is barred from commenting here.

With the help of my therapist I negotiated a place back at Heythrop and managed to do much better. I achieved several firsts in Latin, Greek and Church History, and respectable seconds in fundamental theology and Biblical studies. I devoted much more time to studying, staying in the library until closing time, taking notes, consulting all works in the bibliographies. Nevertheless, I couldn't keep it up. The domestic situation hadn't changed, and had in fact worsened (which also goes to explain the extra time I spent in the library), I was still working part-time and had no day off (I was even working Sundays), I was still having to travel the four hours everyday. My money was fast disappearing, squandered on a trip round Italy with my father, dining out, the Royal Opera House, not to mention an expensive wardrobe. I dropped out again.

Now that I am a drain on society, being both unemployed and in debt, I had been giving very serious thought to going back to Heythrop to actually finish my degree. And I would have this time. I would have moved into halls of residence in order to extricate myself from my toxic family (my sister, who hasn't changed, is moving back with us), and knuckled down. But I read the sad news two days ago that the college will be closing in its current form as a constituent member of the University of London in 2018 and, as such, won't be accepting new students. I was grieved at this ill turn more for the college, which last year celebrated its fourth centenary, than for myself. But for myself, I have nowhere to go. I am at this moment trying to have the debt for my tuition fees waived, or in some way reduced, as I did in fact leave the university for health reasons. Otherwise I am ineligible for student finance. Postgraduate degrees cost over £6,000 which I can scarcely afford even if I were not already in debt. And I am beginning to feel tired with rejected applications for menial jobs that I don't even want.

Above all, I need to get out. I need to get out of this prison without bars. But the only way I can do that seems to be by returning to education of some sort. A friend of mine found a MA in Christian Liturgy that I could do. Otherwise there are undergraduate degrees in Theology, if I can only get the money to fund them, at places like King's College London. I need to get out. Life for me at this time is nothing short of a living hell.

So I desperately implore readers for their prayers for me at this time. Pray for me that I can get out and move on.
Posted by Patrick Sheridan at 5:12 pm
Email ThisBlogThis!Share to TwitterShare to FacebookShare to Pinterest