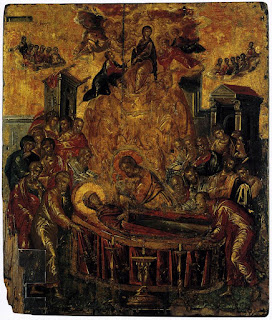 "So thou truly foresaw, that thou wouldst be called blessed by all generations, not from the moment of death but from the very moment of conception. Therefore death hath not made thee blessed, but thou hast thyself made death glorious; thou hast destroyed its horror and shewn death to be joy." From a sermon on the Dormition of the Mother of God by St John of Damascus.

In Tolkien's dealings with Death...is there any other subject in Tolkien?...we are presented with a two-sided coin. On the one hand is the alleged "immortality" of the Elder Children of Ilúvatar, the Elves; that is to say that they are identical with the natural life-span of the earth itself, and not "immortal" in a divine sense. And on the other is the mortality of the Younger Children of Ilúvatar, Men, who die after a comparatively short span of years. The "fall" of the two kindreds is inextricably linked up with Death, with mortality and longevity. This is not going to be an exhaustive exposition of the entire subject, in which I am busy elsewhere, but a note on a good Death by a good Man. The Númenóreans were, in their beginning, good. They were rewarded for their rejection of Morgoth with enhanced gifts in arts, lore, beauty and a span of years thrice that of lesser men (and sometimes more). When the time came for their eternal rest, they would lie them down to rest and relinquish life voluntarily by surrender in faith and trust before being compelled by illness or senility. The only such deathbed discussed in detail is that of King Elessar in Appendix A of The Lord of the Rings. It is one of the most moving and theologically fecund accounts in Tolkien; Aragorn and Arwen discuss the Memory of their days, and the sundering fate of the two kindreds. In splendour and piety, Aragorn then said: "Behold! we are not bound for ever to the circles of the world, and beyond them is more than memory. Farewell!" So he died, and in death his countenance was fairer ever than it had been in life.

In one of his letters Tolkien compared a good Númenórean death (death being natural biologically and spiritually for Men) to the Assumption of St Mary. The Mother of God was the only unfallen person (save Christ), and so her falling asleep in the fullness of her days can be seen as a simple regaining of unfallen grace and liberty. She asked to be received, and was received. And so the words of St John of Damascus, almost as a retelling of the Paschal Troparion, come to mind: "thou hast destroyed its horror and shewn death to be joy." So the faithful Kings of Númenor died, so Aragorn died; so too did Our Lady, the Mother of God most holy, of whom was born Christ the Saviour. What praise could one say more?


We beseech thee, O LORD, mercifully to forgive the sins of thy people; that we, who of ourselves can do nothing that is acceptable unto thee, may be succoured by the intercession of the Mother of thy Son. Who liveth and reigneth with thee in the unity of the Holy Ghost, one God now and ever and unto the ages of ages. Amen.

As Rubricarius said yesterday, possibly the finest Collect in the service books. That's a tough one; I like the Collects for Purity, that of the Invention of the Holy Cross, the third Sunday after Easter, and many beside. But I suppose that antient prayers become dearer when they are cruelly suppressed by despotic madmen.

Art: El Greco, shamelessly stolen from Saint Lawrence Press blog. Notice the careful integration of the two traditions of East and West in this masterpiece. A nice ecumenical painting.
Posted by Patrick Sheridan at 9:00 am
Email ThisBlogThis!Share to TwitterShare to FacebookShare to Pinterest