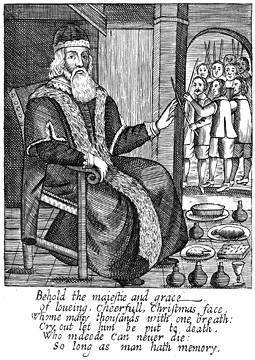 "Better is a dinner of herbs where love is, than a stalled ox and hatred therewith." Proverbs 15:17.

Well, it's that time of year again. A time to exchange pleasantries with people whom deep down we despise; a time to sit at meat with folk whom really we wish were dead, etc. I wish to God I could spend 25th December with people I really loved for a change! I'm sorry to say that they are all off with their families putting up with them (although perhaps there really do exist people who love their families...), and the hypocrisy of the season has me stuck at home in a "festive" jumper and party hat forced upon me by my mother and listening to my malicious sister Jemima, the most unwelcome guest since Katisha, going on about how religion is for idiots and the rest of her cynical, ignorant drivel. Saying "I believe in science" is just as arbitrary as saying "I believe in astrology," and adding "not fairy tales" just gives undue offence to countless people. Her borderline tendencies have her constantly seeking attention, which probably explains her verbal diarrhoea, and she becomes worse with drink. Small wonder then that every 25th December I deliberately get myself drunk by lunch time! That is no easy task; all those glasses of Champagne, and Campari (yes, I am a tart), not to mention the Guinness to wake me up at dawn. Being half cut makes the day so much more tolerable.

This year Jemima is bringing her new boyfriend Nick, an "actor." My father calls him Bottom, possibly alluding to his more-than-likely having played Bottom in more than the Shakespearean sense, although I don't think Nick knows Shakespeare well enough to get that joke. This is the wet paper bag of a man who seems to live in terror of my sister and, on my parents' anniversary, said he doesn't have any religion at all. No wonder my mother didn't like him. My Ulster mother and I don't see eye to eye on most matters but on this we are united and my mother would agree, I'm sure, with C.S Lewis when he said, homo post-Christianus non similis homini pre-Christiano. Tantum distant ut vidua a virgine...non enim Christi modo legem sed etiam legem Naturae Paganis cognitam negligunt. Rather like the prodigal son going back to the pigs trough. I could imagine Nick with his head in a trough.

We haven't got there yet. Christmass is still some days away. But is all this falseness what the spirit of the season is really about? Keeping up appearances? We must work away at the unlovable; if love means anything at all it is for our enemies that we must pray. This I know deep down but I think that for all men there is that one exception; that one person from whom we cannot escape and for whom we cannot even assume a veneer of civility, knowing that he or she is a vile, wretched little orc. One's "nemesis," or almost. I just do my utmost to avoid her. That is all that is within my ability. My hatred was worse during those, fortunately erstwhile, six months when she was living with us. Now I just have to get myself through birthdays, anniversaries and Christmasses and fortunately, the lord Christmass, Nowell himself in his finery and jollity (he's Bacchus in a red cope), keeps me merry enough to forgo wrath. I hope you too raise your glasses to Old Father Christmass on Christmass Day.
Posted by Patrick Sheridan at 9:00 am
Email ThisBlogThis!Share to TwitterShare to FacebookShare to Pinterest