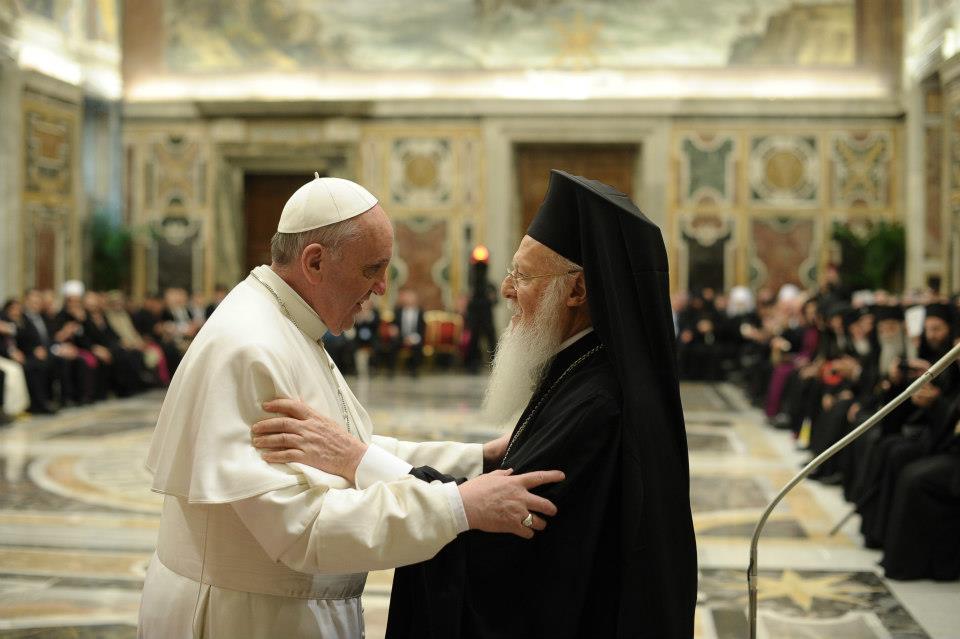 Fr Hunwicke has written about the meeting of pope Francis and patriarch Bartholomew and I thought I'd say something about ecumenism.

I find myself in sympathy with those efforts that are strictly ecumenical, in the abstract. However I find all the joint declarations, photographs, talk about "progress," watered-down liturgies and general pussyfooting around completely spurious and dangerous. Indeed it reminds me of the lottery in Nineteen Eighty-Four. No prizes for guessing who wins - nobody, ever. And what do the ordinary people get from it? Nothing. The simple simply do not know or care what the pope is getting up to meeting some foreign prelate in a far off country and they are probably completely unaware of what goes on in the Baptist, Methodist or Anglican church in the next street let alone in a Byzantine or Monophysite church. For prelates to declare unity while not carrying the simple folk along with them is like so many castles in the air. Church unity, if there is ever to be such a thing, will have to come from the ground upwards, not the other way around. And, I'm sorry, but people are not interested. They are devoted to their parishes; if the existence of other Christians occurs to them at all, it's in some incidental context, like walking past another church on the way to the post office or, if you're a Traddie, in your summary condemnations of all non-Traddies. You can't change people like this so why bother trying? And even if unity were declared (but certainly not realised), what difference would it make? People would go on as they did before, if you changed nothing; and if you did change things, they would be disrupted and ill-used.

As for the problems inherent to the whole process, I simply shake my head in disbelief. All these declarations, these aliturgical convocations, the relativistic and wholly complacent inter-communion services, the smiling faces; it doesn't foster neighbourliness or improve things; it just pisses me off.
I don't suppose that breaking off ecumenical relations with a particular ecclesial body for the sake of Truth would be the done thing in these days of relativism and spinelessness. This maddeningly weak and pathetic culture of desperately trying not to offend people, inaptly termed "political correctness," has seeped even into the Church! None dare speak their mind nowadays! If everyone simply said: "I believe this, my church fortifies me in this belief and I will not compromise," then we could all sit down to tea together and try to exercise the virtue of charity, ut omnes unum sint. The Westminster Confession and the Roman catechism are irreconcilable; modern Roman liturgical books and the Byzantine rite are, except in some superficial similarities, manifestly at variance and expressive of two completely different traditions, liturgical theologies and of faith. The Anglican ordination of women cannot be reconciled to the constant praxis of the Church; need I say more? There are hosts of other problems; saints canonised by different churches being brought into some nebulous, future "united Church," each condemning the traditions of the other; reconciliation of liturgical traditions, subtle points of Christology and Trinitarian Theology; the Sacraments, their number, theologies; pastoral theology, monasticism and religious orders, the Kalendar; the ministry of women in a general sense; vocations; church polity; biblical and liturgical translations; the list goes on and on.

I wonder what they're saying? That is, the pope and patriarch. Do you think it's something like "everything is hunky dory; there are no serious canonical, liturgical, theological differences between us. We're all all right. Let's share our sacraments together in a wondrous relativistic fudge with complete disregard for our traditions and the sentiments of our faithful."

Ecumenism, as practised to-day, is one of the worst and most ludicrous heresies ever to plague Christ's Church.
Posted by Patrick Sheridan at 12:00 pm
Email ThisBlogThis!Share to TwitterShare to FacebookShare to Pinterest