The Lord of Waters... 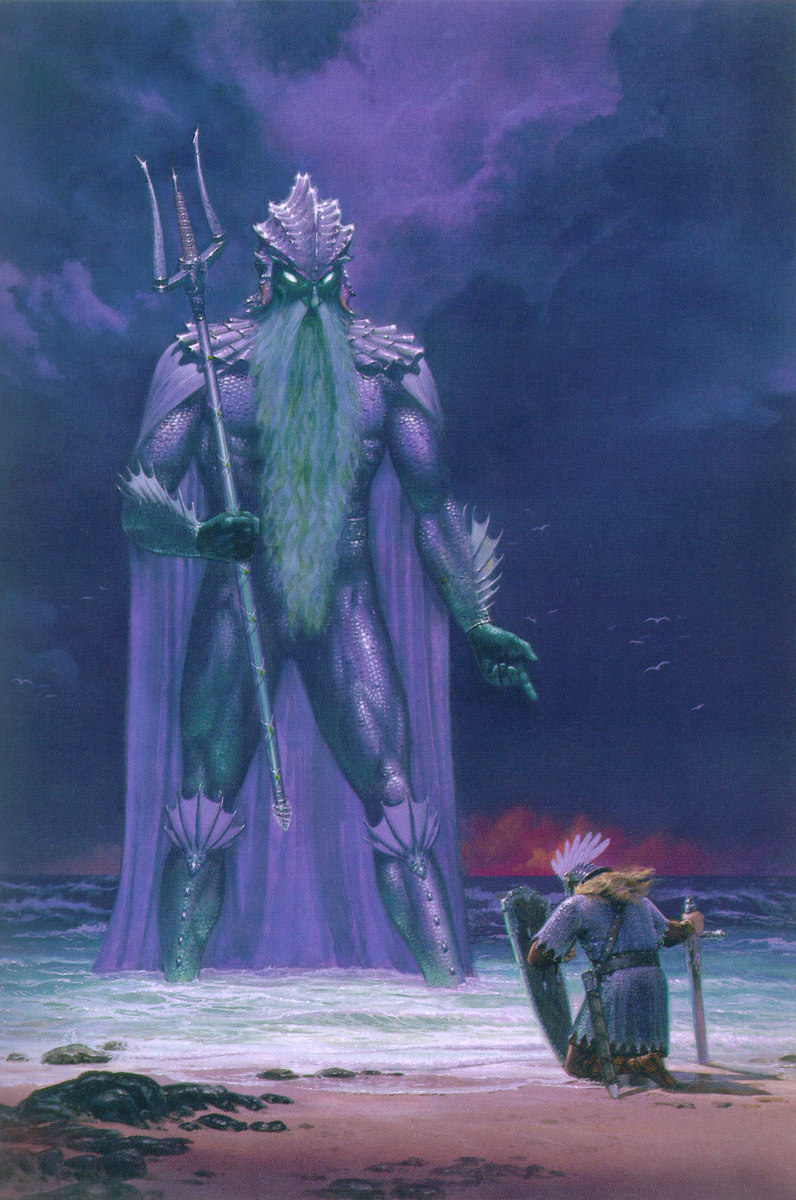 Behold now Ulmo leapt upon his car before the doorway of his palace below the still waters of the Outer Sea; and his car was drawn by narwhal and sealion and was in fashion like a whale; and amidst the sounding of great conches he sped from Ulmonan. So great was the speed of his going that in days, and not in years without count as might be thought, he reached the mouth of the river. Up this his car might not fare without hurt to its water and its banks; therefore Ulmo, loving all rivers and this one more than most, went thence on foot, robed to the middle in mail like the scales of blue and silver fishes; but his hair was a bluish silver and his beard to his feet was of the same hue, and he bore neither helm nor crown. Beneath his mail fell the skirts of his kirtle of shimmering greens, and of what substance these were woven is not known, but whoso looked into the depths of their subtle colours seemed to behold the faint movements of deep waters shot with the stealthy lights of phosphorescent fish that live in the abyss. Girt was he with a rope of mighty pearls, and he was shod with mighty shoes of stone.

Thither he bore too his great instrument of music; and this was of strange design, for it was made of many long twisted shells pierced with holes. Blowing therein and playing with his long fingers he made deep melodies of a magic greater than any other among musicians hath ever compassed on harp or lute, on lyre or pipe, or instruments of the bow. Then coming along the river he sate among the reeds at twilight and played upon his thing of shells; and it was nigh to those places where Tuor tarried. And Tuor hearkened and was stricken dumb. There he stood knee-deep in the grass and heard no more the hum of insects, nor the murmur of the river borders, and the odour of flowers entered not into his nostrils; but he heard the sound of waves and the wail of sea-birds, and his soul leapt for the rocky places and the ledges that reek of fish, for the splash of the diving cormorant and those places where the sea bores into the black cliffs and yells aloud. 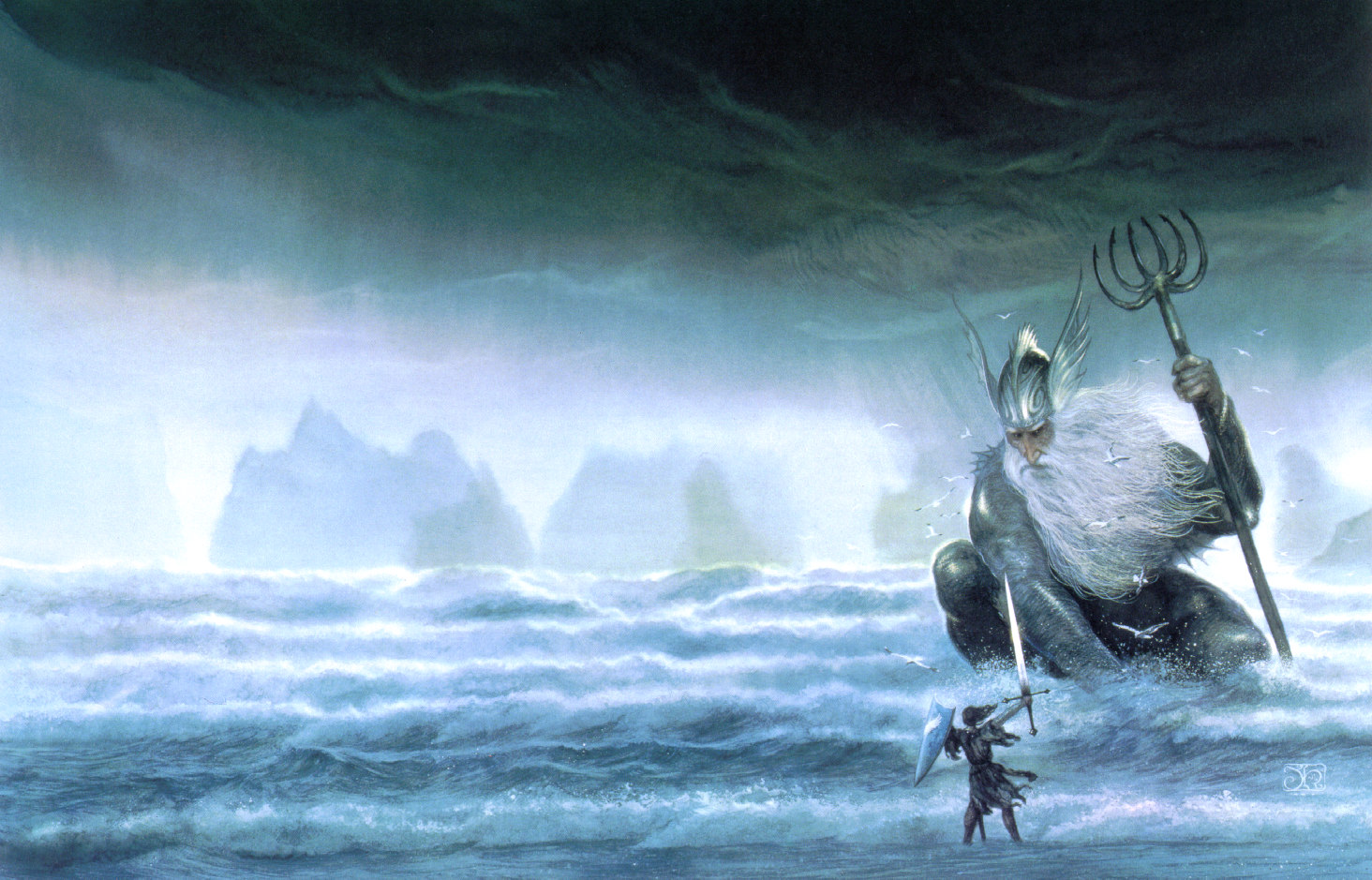 Then Ulmo arose and spake to him and for dread he came near to death, for the depth of the voice of Ulmo is of the uttermost depth: even as deep as his eyes which are the deepest of all things. And Ulmo said: "O Tuor of the lonely heart, I will not that thou dwell for ever in fair places of birds and flowers; nor would I lead thee through this pleasant land, but that so it must be. But fare now on thy destined journey and tarry not, for far from hence is thy weird set. Now must thou seek through the lands for the city of the folk called Gondothlim or the dwellers in stone, and the Noldoli shall escort thee thither in secret for fear of the spies of Melko. Words I will set to your mouth there, and there you shall abide awhile. Yet maybe thy life shall turn again to the mighty waters; and of a surety a child shall come of thee whom no man shall know more of the uttermost deeps, be it of the sea or of the firmament of heaven." Then spake Ulmo also to Tuor some of his design and desire, but thereof Tuor understood little at that time and feared greatly. (J.R.R Tolkien, The Book of Lost Tales volume II, chapter III).

Just some Tolkien for you, some very old Tolkien. The earliest sketches for The Fall of Gondolin, of which this is part, were written in pencil while Tolkien was convalescing in hospital in 1917. "Stealthy lights of phosphorescent fish" sticks in my mind from this passage. Very Greek! You won't find "phosphorescent" anywhere else in the legendarium!

The artists, Ted Nasmith and John Howe respectively, both had The Silmarillion account of Ulmo's visitation in mind where, of course, he arises out of a great sea storm by the coasts of Vinyamar and not in the summer twilight in the Land of Willows, as in the Lost Tales. Which painting do you prefer?
Posted by Patrick Sheridan at 9:00 am
Email ThisBlogThis!Share to TwitterShare to FacebookShare to Pinterest