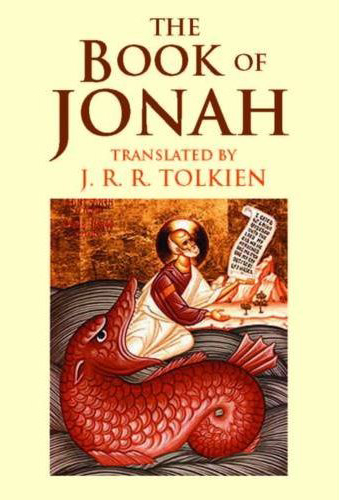 "At the roots of the mountains. I went down into the countries beneath the earth, unto the peoples of the past. But you raised up my life from the pit, Yahweh, my God." Jonah 2:7, from Tolkien's own translation.

Compelled, as they were, to compile a translation in timeless English (a dead term) Alexander Jones wrote to Tolkien in January 1957 and expressed his profound longing to "have an English Bible translation from such a hand." I don't know what he expected; Tolkien's right English goodliness of speechcraft is hardly "timeless," and Tolkien's original translation of Jonah (from French into English) was so heavily revised for the 1966 publication that it ceased to be his own. When asked to contribute, Tolkien sent a sample translation of Isaiah's prophecy, even so:

Heavens hearken, earth give ear, for Jahveh speaks: I have brought up sons and caused them to grow, but they have rebelled against me. The ox knows its keeper, and the ass the crib of its master; Israel knows nothing, my people understand nothing.

It's poetically alliterative but rather dumbed down towards the end. Compare this to the Authorized Version:

Hear, O heavens, and give ear, O earth: for the LORD hath spoken, I have nourished and brought up children, and they have rebelled against me. The ox knoweth his owner, and the ass his master's crib: but Israel doth not know, my people doth not consider.

Tolkien's attempt here reminds me very much of Mgr Ronald Knox's New Testament. Knox's translation is a marvellous scholarly feat but I always got the impression that its style was somewhat artificial. Take one of the dearest moments in St John's Gospel, for example:

Woman, Jesus said to her, why art thou weeping? For whom art thou searching? She supposed that it must be the gardener, and said to him, If it is thou, Sir, that hast carried him off, tell me where thou hast put him, and I will take him away. Jesus said to her, Mary. And she turned and said to him, Rabboni (which is the Hebrew for Master). Then Jesus said, Do not cling to me thus; I have not yet gone up to my Father's side. Return to my brethren, and tell them this: I am going up to him who is my Father and your Father, who is my God and your God.

I mean, if intelligibility or applicability is the desired end why retain obsolete pronouns? Do men find "saith" more difficult than "said," or "borne," for "carried?" What you end up with is something dull and uninteresting.

Five years ago Tolkien's original translation of Jonah was going to be published in its own handsome cover. For some legal reason it was shelved. It would have been marvellous to see Jonah's prayer turned into alliterative verse; the style most dear to Tolkien. I mean it would be unsuitable for liturgical use but in one's private devotions...
Posted by Patrick Sheridan at 9:00 am
Email ThisBlogThis!Share to TwitterShare to FacebookShare to Pinterest