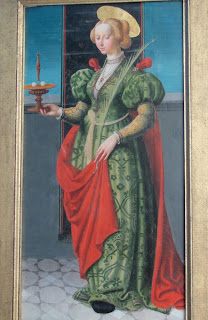 It's St Lucy's Day to-day (in the Gregorian Kalendar). I suppose you could say that St Lucy serves as a satellite for Christmass Day. During Advent we await the coming of the LORD as a weary people in darkness and the cold and the dark amidmost we venerate St Lucy in a festival of light. Years ago I attended a carol service on St Lucy's Day where a wonderful sermon was preached connecting the saint with the antient Hebrews in the darkness before the dawn (that is, the birth of Christ). I wish I could remember it! Instead, perhaps this passage from The Lord of the Rings might resonate with you? 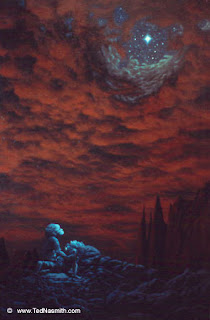 Frodo sighed and was asleep before the words were spoken. Sam struggled with his own weariness, and he took Frodo's hand; and there he sat silent till deep night fell. Then at last, to keep himself awake, he crawled from the hiding-place and looked out. The land seemed full of creaking and cracking and sly noises, but there was no sound of voice or of foot. Far above the Ephel Dúath in the West the night-sky was still dim and pale. There, peeping among the cloud-wrack above a dark tor high up in the mountains, Sam saw a white star twinkle for a while. The beauty of it smote his heart, as he looked up out of the forsaken land, and hope returned to him. For like a shaft, clear and cold, the thought pierced him that in the end the Shadow was only a small and passing thing: there was light and high beauty for ever beyond its reach. His song in the Tower had been defiance rather than hope, for then he was thinking of himself. Now, for a moment, his own fate, and even his master's, ceased to trouble him. He crawled back into the brambles and laid himself by Frodo's side, and putting away all fear he cast himself into a deep untroubled sleep. (The Lord of the Rings, Book V, Chapter II).
Posted by Patrick Sheridan at 6:41 pm
Email ThisBlogThis!Share to TwitterShare to FacebookShare to Pinterest