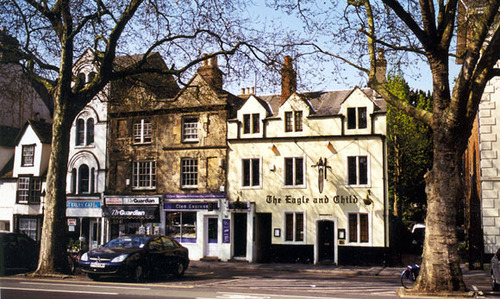 To-day I thought I'd share with you a passage from The Lord of the Rings. Quite at random, really; I opened book I at chapter IX and found this:

"They were washed and in the middle of good deep mugs of beer when Mr. Butterbur and Nob came in again. In a twinkling the table was laid. There was hot soup, cold meats, a blackberry tart, new loaves, slabs of butter, and half a ripe cheese: good plain food, as good as the Shire could show, and homelike enough to dispel the last of Sam's misgivings (already much relieved by the excellence of the beer)."

It makes a pleasing change to narrate a more homelike (to borrow the phrase) passage than to go on about such weighty matters as kingship with constancy. It is Tolkien's genius to warm the heart with such passages, particularly at times of fear, to remind us of our kinship with hobbits, and that the Sun of Middle-earth sets over our own fields too. I don't have book IV to hand (do I go back upstairs..?) but there is another where, upon their meeting in the fields of Calenardhon, Éomer asks Aragorn whether a man can walk open-eyed in the broad light of day amid so many wonders. The Prancing Pony Inn, blundering Butterbur and his plain food illustrate that you can. The inn is situated in an atmosphere of fear and suspense; with ruffians stalking the woods about the town, the memory of the Old Forest, ill-favoured men, not to mention the Black Riders. It's almost as if plain, hearty food and drink are the tonic for all that. It brought a smile to my face anyway.
Posted by Patrick Sheridan at 12:00 pm
Email ThisBlogThis!Share to TwitterShare to FacebookShare to Pinterest