Gregory VII and the Rationale... 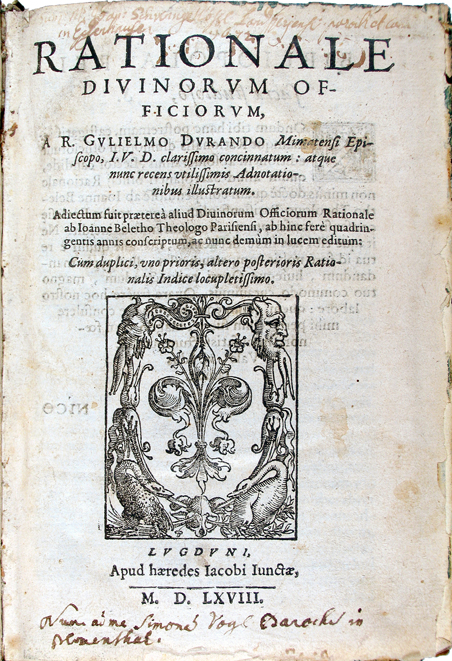 "Since your excellency has asked that we would allow the divine office to be said among you in Slavonic, know that we can by no means favourably answer this your petition. For it is clear to those who reflect often upon it, that not without reason has it pleased Almighty God that holy scripture should be a secret in certain places, lest, if it were plainly apparent to all men, perchance it would be little esteemed and be subject to disrespect; or it might be falsely understood by those of mediocre learning, and lead to error. Nor does it avail as an excuse that certain religious men have patiently suffered the simple folk who asked for it, or have sent them away uncorrected, which, after Christianity had grown stronger, and when religion was increasing, were corrected by subtle examination. Wherefore we forbid what you have so imprudently demanded of the authority of St Peter, and we command you to resist this vain rashness with all your might, to the honour of Almighty God." From an epistle of pope Gregory VII to Vratislaus II of Bohemia; text from the Patrologia Latina, Migne 1844.

Pope Gregory VII wrote this letter in A.D 1079. Two centuries later Durandus, rector of the theological schools in Paris, composed the famous Rationale Divinorum Officiorum with the express wish of dispelling ignorance of scripture and the divine offices where the Roman pope wished to maintain it! In the preface we find:

"But what shall we say of our own times, if scarcely or not at all there may be found any man who understands what he reads or hears read, or who truly perceives what he sees done or does himself? We must lament with the prophet, etc."

It's interesting that the popes so often esteemed by the Traddies have actually been some of the most arrogant and destructive men in ecclesiastical history. The content of pope Gregory's epistle is reminiscent of his treatment of the Mozarabic Rite in Spain and so expressive of the general tendency of popes to deliberately obscure and manipulate the scriptures themselves to uphold a plethora of abuses. I daresay one could argue for almost any moral position or doctrine from the scriptures when they are not interpreted properly! Nevertheless, this attitude, maintained throughout the Middle Ages, was strikingly at variance with the apostolic labours of such men as St Bede, who translated portions of the Bible into Old English for the edification of the simple folk.

This subject has been done to death, I fear, but what interests me is the change. In mediaeval times vernacular translations of the Bible and vernacular liturgy were too often associated with heretical sects like the Waldensians or Lollards. Literate persons knew Latin anyway. When Erasmus wrote in favour of popular reading of the Bible in 1527 the University of Paris called him rash and impudent and cited a three hundred year old "decree" of Innocent III condemning the matter. Sixty years later and the Rheimish New Testament was published and now bears the Baronius Press hallmark. Why the change? Rise in literacy? Pressure from the Protestant reformers? Counter Reformation missionary zeal, manifestly the Jesuits?

I'd be interested if any readers with better knowledge of this would comment with their thoughts on this matter. Because, as in so many other matters, the constancy of the Roman church has proven less fast than previously imagined.
Posted by Patrick Sheridan at 9:00 am
Email ThisBlogThis!Share to TwitterShare to FacebookShare to Pinterest