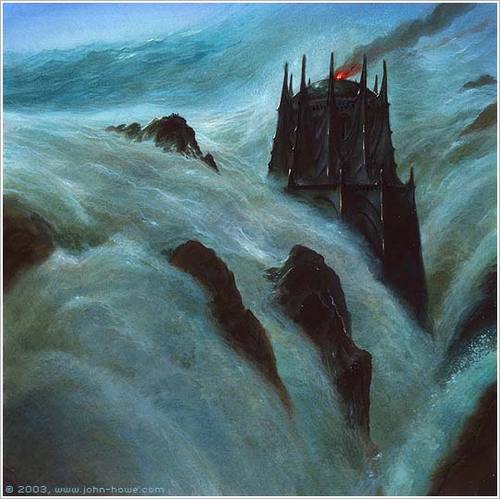 I have strange dreams. Don't we all? You may remember that Marks & Spencers used to have life-like mannequins (do they still have them?). I had a nightmare about them when I was very little, which featured the evil garden gnome my neighbours Tony and Irene ("the Baptists") used to have on their porch. They bit my fingers off, one by one. Well, last night I had a very strange dream about an old tribe or cult. I'm not sure what they worshipped but they had a temple in their cult built at the top of an huge tower with two minarets shaped like the phallic symbol on either side of the entrance and above the entrance to this temple was a Latin cross in an obscene and provocative position. The men of the tribe practised sodomy.

Think what you will about the depths of my subconscious mind, I think this is telling about our own modern culture of progress and depravity. St Paul does say that sodomy has its uttermost origins in idolatry. God help me! God for His mercy give Grace!

Art: John Howe. This is the temple built in honour of Morgoth at Sauron's behest in Númenor. It was destroyed during the Change of the World at the end of the Second Age, which is what the painting depicts. It looks nothing like this "temple" of my own imaging but similar arts and rites were probably performed there. It's interesting that Tolkien equates the decline in Númenórean longevity with their growing pride and, finally, their fall into darkness and idolatry; biblical genealogies reflect this too. In those days, under the domination of Sauron, they became fierce and desperate. In the case of despair or desperation I have noticed that my own falls into the sin of lust seem connected to despair. A trendy psychologist might say that is "self-hatred." But modern scientists are no longer lovers or seekers of Truth. The same can be said of the religious too. It's hardly surprising that I tend to view all men as inherent liars these days. There might be sincere and honest people out there but I daresay most worship in the temples of Morgoth.
Posted by Patrick Sheridan at 8:30 am
Email ThisBlogThis!Share to TwitterShare to FacebookShare to Pinterest