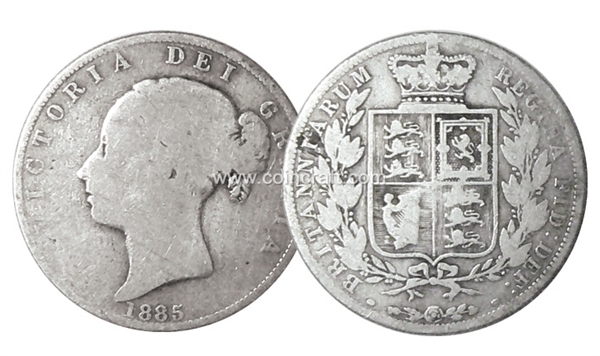 Before my grandmother moved to Ireland in 2003, she left me my late grandfather's old collection of coins from his travels as a young man in the Navy. There are coins from all manner of countries, in foreign currencies some of which I have never heard of, but one of the oldest and most interesting in the collection has to be the silver half crown with Queen Victoria's portrait on it. Its high silver content is shewn by its state, which is quite worn. My father was 14 years old when the British Pound was "decimalised" and half crowns discontinued so I have never used the old coins (but I do remember heavier 50p coins), but holding this half crown with the Widow of Windsor's countenance thereon, which was legal tender until 1967 (I think), gives one a sense of history which modern money, even when it is used at all, simply does not. Peter Hitchens has written an interesting article on his blog about the old money which reminded me of granddad's old collection.

All I can ever get out of my parents about the old money is that sweets were cheaper. I have no memory of the old money; "D Day" was 17 years before I was born, but I have always measured in inches, feet and yards. Another way to stave off the dark tide!
Posted by Patrick Sheridan at 12:00 pm
Email ThisBlogThis!Share to TwitterShare to FacebookShare to Pinterest