The darkness and the light of Puritania... 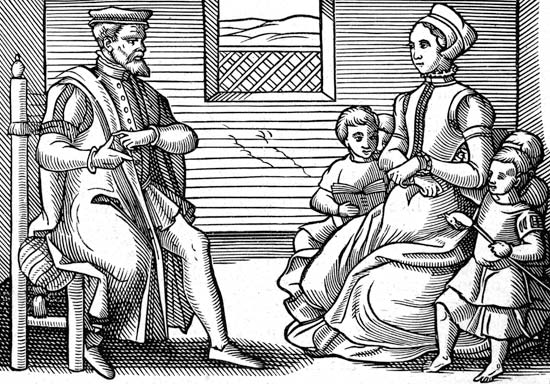 The modern world is totally evil. In England we're fast becoming a despotism. It was said that by 1984, riveted into the home of every family, there would be a one way television screen through which we would see nothing (what a relief!) but through which we would be watched continuously by Big Brother. We're thirty years too late for that but we're not far off. And that's not all. Not a day goes by when I don't see a dark face. People go about with mobile phones pressed to their ears, jingling with amulets, bright clothes, ripped jeans...creating no sensation whatsoever. Gay marriage, fornication, abortion-on-demand, the cashless society. I wish I had more opportunity to use my cheque book.

We can't stop it, pray as we might. All this globalisation, decline in morals, it is an insatiable tide of darkness and all we can do is flounder and reach up to Christ our God. What we can strive to do, though, is embrace a form of Puritanism. Now, I'm not in the financial position to move to the county so forbearance will have to suffice for the dark faces speaking in tongues harsh with antient idolatry but what I can do, and offer to my readers as something worth considering to stave off the tide, is to try to live life to the best of my ability as though it were not, in fact, 2014. "Live in the past," in other words. On your respective journeys to the Celestial City, perhaps, like me, you might like to consider the following:

I. Is the Gregorian Kalendar worth keeping? It is not the Kalendar bequeathed to us by Tradition. Try to avoid "civil holidays" too, like all these "international" something-days one often sees on Google. Live life according to the liturgical kalendar...a real one, of course.

II. Is Greenwich Mean Time really that useful for someone living in Cornwall? I mean, before the Industrial Revolution we all had local times. Why not go back to those happy, simple times? In my case, Greenwich is less than ten miles from my house so this might be more difficult for people outside London...

III. Is possession of a mobile phone an absolute necessity? And ear phones, we can all do without those. Keep an address book handy, of course. And if people can't get hold of you, that's too bad. I personally resent the idea that I can be disrupted whithersoever I go by someone I'd rather not have contact with (such as work).

IV. Food is something of a problem these days. With so many cultures brought in, etc. Try to eat only in season. Never eat foreign strawberries in January. Try to eat plain, wholesome food. Don't refrigerate everything. In fact, try to stop using the refrigerator altogether. I drink Guinness in the summer mornings because I won't use refrigerated milk.

V. Do not eat Kosher or Halal. That means boycotting certain brands (e.g, Heinz) and refusing to buy meat in certain shops.

VI. Milk comes cheap in plastic bottles these days, unless you're wealthy enough to still have the milkman deliver it. If, like us, you're too poor to benefit from the services of a milkman, buy a nice milk jug and store your milk in it. Milk is precious and worth more than a plastic container.

VII. Try to keep holy the LORD's Day. Don't do things like shop, or go to the theatre. The new Sunday trading laws exist for the benefit of atheists but that doesn't mean that we have to cheapen Sundays by becoming like them.

VIII. I'm sure readers of this blog dress appropriately. I feel more comfortable paying that little bit more knowing that my clothes were made in a factory in this country, where conditions are good, rather than some sweat shop in India. Labels aren't everything, of course. I buy most of my clothes from Charles Tyrwhitt.

IX. The "cashless society." If that is not the mark of the beast, I don't know what is! Try to avoid paying by card in shops. Not only is it none of your bank's business where you spend your money but, having worked in a bank and having spent considerable time going through customer transactions, you'd be surprised how much you can learn about a person by their spending habits. Everything is recorded; the exact date and time, the store number and address, the amount debited. That information should be between you and the retailer. If you use your cheque book at the counter in the bank, however, and just draw on the account, the bank is none the wiser. Avoid ATM's and use the counter service, even if you have to queue up for ages. Use your cheque book as often as you can.

X. When shopping, try to avoid using the express checkouts. They're putting people out of jobs and seem geared towards this solipsistic, I'm alright culture. What happened to customer service?

XI. Charity. It is not your moral responsibility to feel concern or compassion for people you've never met, and never will, who live thousands of miles away and do not help themselves. Charity begins at home. Do not give to Children in Need or Comic Relief. Do not countenance or support these bogus enterprises in any way.

XII. Going to and from your homes, do not speak to anyone unless you are spoken to; try not to look at other people. Instead, try to observe silence.

I hope these points are of interest to you. Now it's just a question of implementing them.
Posted by Patrick Sheridan at 9:00 am
Email ThisBlogThis!Share to TwitterShare to FacebookShare to Pinterest