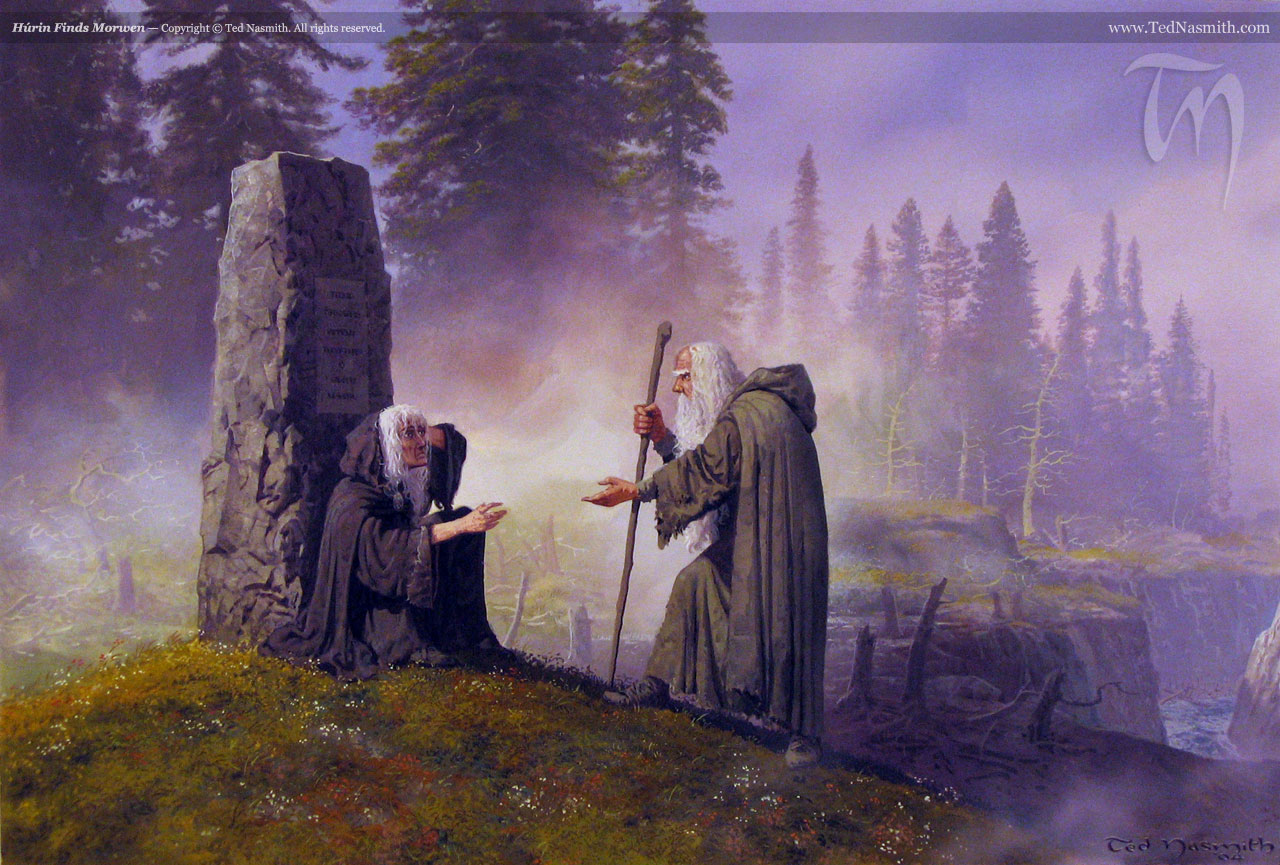 "The night sentinels saw him, but they were filled with dread, so that they did not dare to move or cry out; for they thought that they saw a ghost out of some old battle-mound that walked with darkness about it. And for many days after men feared to be near the Crossings at night, save in great company and with fire kindled.

"But Húrin passed on, and at evening of the sixth day he came at last to the place of the burning of Glaurung, and saw the tall stone standing near the brink of Cabed Naeramarth.

"But Húrin did not look at the stone, for he knew what was written there, and his eyes had seen that he was not alone. Sitting in the shadow of the stone there was a figure bent over its knees. Some homeless wanderer broken with age it seemed, too wayworn to heed his coming; but its rags were the remnants of a woman's garb. At length as Húrin stood there silent she cast back her tattered hood and lifted up her face slowly, haggard and hungry as a long-hunted wolf. Grey she was, sharp-nosed with broken teeth, and with a lean hand she clawed at the cloak upon her breast. But suddenly her eyes looked into his, and then Húrin knew her; for though they were wild now and full of fear, a light still gleamed in them hard to endure: the elven-light that long ago had earned her her name, Eðelwen, proudest of mortal women in the days of old.

"But Húrin did not answer, and he sat beside the stone with Morwen in his arms; and they did not speak again. The sun went down, and Morwen sighed and clasped his hand and was still; and Húrin knew that she had died.

"So passed Morwen the proud and fair; and Húrin looked down at her in the twilight, and it seemed that the lines of grief and cruel hardship were smoothed away. Cold and pale and stern was her face. 'She was not conquered,' he said; and he closed her eyes, and sat on unmoving beside her as night drew down. The waters of Cabed Naeramarth roared on, but he heard no sound and saw nothing, and he felt nothing, for his heart was stone within him, and he thought that he would sit there until he too died." (The History of Middle-earth, Volume XI, Part III).

I'm glad that Tolkien decided to have Húrin and Morwen meet again. The original Quenta (1930) told that Morwen read the stone and then died but a penciled note in the margin says: "Some fate of Morwen must be devised. Did Morwen and Húrin meet again?" Originally, Tolkien had intended that Túrin meet Morwen in her wandering but this was abandoned.

Eðelwen, the name given to Morwen in her youth, was abandoned in favour of Edhelwen, and eventually Eledhwen. It can be rendered "elf-sheen" into English. It is from the Old English ælfscīene, which means of elven beauty.
Posted by Patrick Sheridan at 9:00 am
Email ThisBlogThis!Share to TwitterShare to FacebookShare to Pinterest