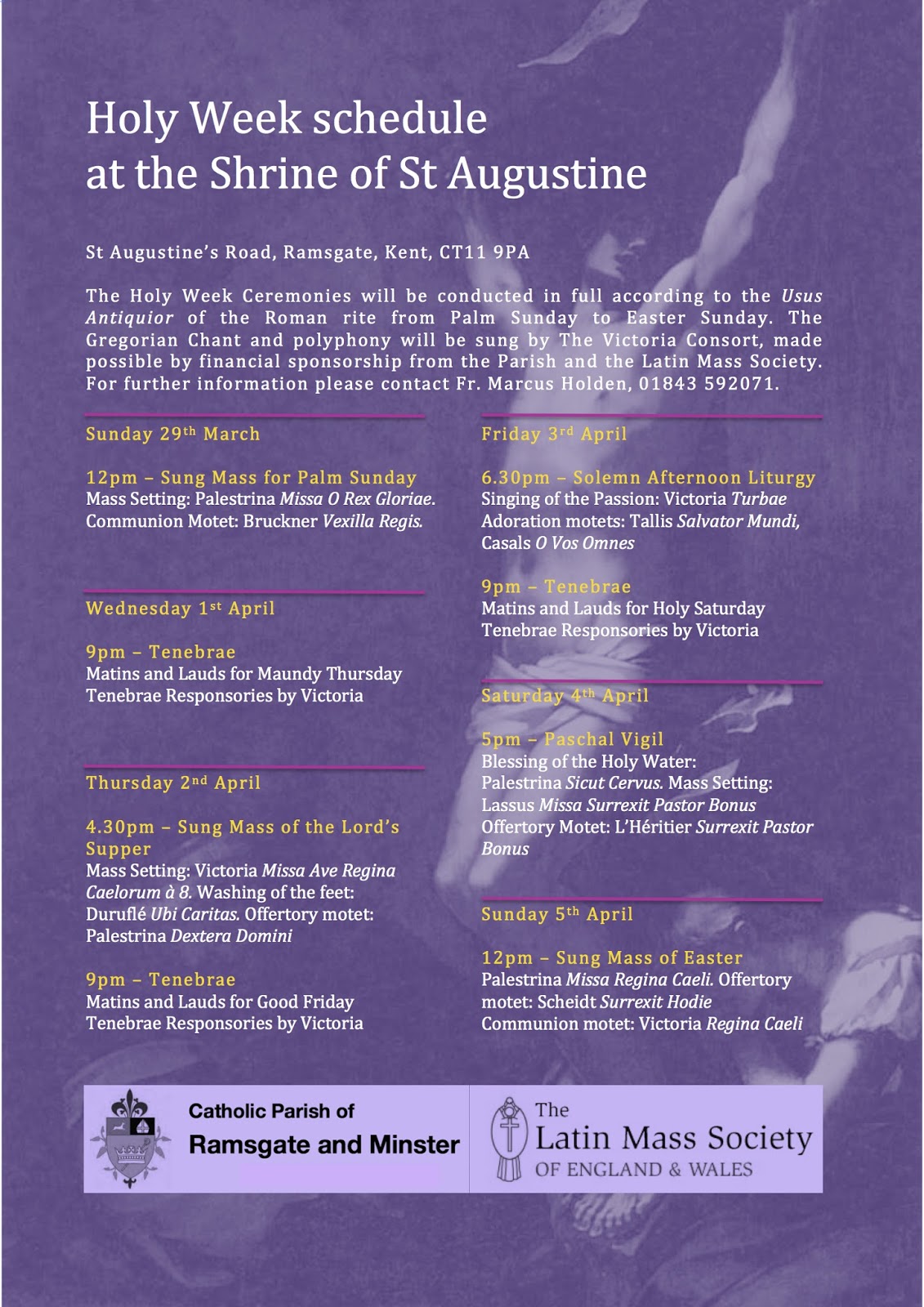 This is very unclear. "The Holy Week Ceremonies will be conducted in full according to the Usus Antiquior of the Roman rite from Palm Sunday to Easter Sunday." What is the Usus Antiquior? I ask because this means different things to different people. Some use it to mean whatever hybrid rite they deem suitable on a whim; others use the term to disguise the fact that they might be performing rites not authorised by Summorum Pontificum, as I often encountered in Traddieland; others might just be doing post-1956. But with this lack of clarity, what happens if somebody travels all that way for the true Roman holy week, that is pre-1911, and expecting Miranda he is greeted by Caliban? Do you see how truly divisive the "usus antiquior" is? And, when it comes to Holy Week, please do not accuse me of liturgical fetishism. Nobody who knows anything at all about these deep matters can deny that Pius XII really bulldozed much that was venerable and sacred in these rites and replaced it with some of the worst abuses and prototypes for the later general reforms.

The schedule speaks of fullness. Well, I'll be the judge of that. It doesn't look to me as if they've a very full liturgical schedule planned. Low Mass on Palm Sunday? They're really pulling the stops out here! I'm guessing the celebrant will be in a vermilion cope with gold braid for what's left of the blessing of palms and the procession? Unveiled processional cross? The people waving unblessed palm branches? Hymns to Christ the King? Is that really worth attending?

Nothing at all on Monday. Monday in Holy Week has some very fine, very old proper responsories for Mattins and the Collect is comforting, begging God that we might breathe again (respiremus) after the Great Fast. Nothing on Tuesday either, despite the ceremony of the Passion gospellers. No Mass on Wednesday? What about St Luke's Passion? I'm assuming everything will be done '62 fashion, so why is Tenebrae at the wrong time? Wrong psalmody at Lauds, following the Sarto reformation, and a bunch of Miserere's cut out.

It gets worse, though! Mass of the LORD's Supper at 4:30pm! With the Mandatum after the Gospel!
I could be wrong but I thought that Christ washed the feet of the Disciples after they had supped but clearly the infallible magisterium trumps all. If they can procure a high Mass for the occasion the ministers might like to exchange the kiss of peace too? Tenebrae at the wrong time again.

"Solemn Afternoon Liturgy?" Well, we won't go on about Mass of the Afore-Hallowed Gifts and how what Pius XII did to Good Friday rivals Palm Sunday for sheer atrocity, but I'm guessing they've moved the time so that nobody has to go very far for Tenebrae, again at the wrong time? What about the Hours? They can easily be monotoned but they're not on the schedule.

I can see the Paschal Vigil on the schedule, which is earlier than is the custom among Traddies at five o'clock, but I can't see the most important liturgy in the entire liturgical year advertised. Where is Paschal Mattins and Lauds? I can see no point in doing Tenebrae three days in a row and then...ah yes, the infallible magisterium has abolished Paschal Mattins in a very clear restatement of its long adherence to Apostolic Tradition.

I've never been to this shrine/church but judging by these impious rites I doubt I ever will. But it would interest me no end to find out why traditionalists think 1962 is so important, and for what reason they go on about their idea of tradition so shrilly. I mean, if the authority of the pope and procurement of the transubstantiated sacrament are all that really matters in religion, why bother with all the embellishments? I've heard it argued before that the reason 1962 is "okay" as far as traditionalists is concerned is because the Mass rite is largely in tact, and bollocks to the Office; it's irrelevant. Following this argument to its conclusion, surely all ceremonies are then just growths and tumours, completely superfluous to the faith and to be cut away by the infallible magisterium? Why bother having a procession of palms at all, or blessing the waters? Why not just have thrice daily low Masses with sermons composed entirely of infallible papal decrees, with no differentiation between any day in the liturgical year? Why not ditch the kalendar altogether and just have votive offices based around the month of Joseph, the month of Mary, etc?

The idea that tradition depends upon this one man seems to me to be a complete inversion of the honest desire for right worship and dignity therein. If you content yourself with and rely upon what is allowed you by an incompetent ecclesiastical authority as opposed to relying on custom and long tradition of orthopraxis then, I'm sorry but your faith is completely spurious and you have replaced Christ our LORD with something or someone else.
Posted by Patrick Sheridan at 12:00 pm
Email ThisBlogThis!Share to TwitterShare to FacebookShare to Pinterest