An examination of "organic development"... 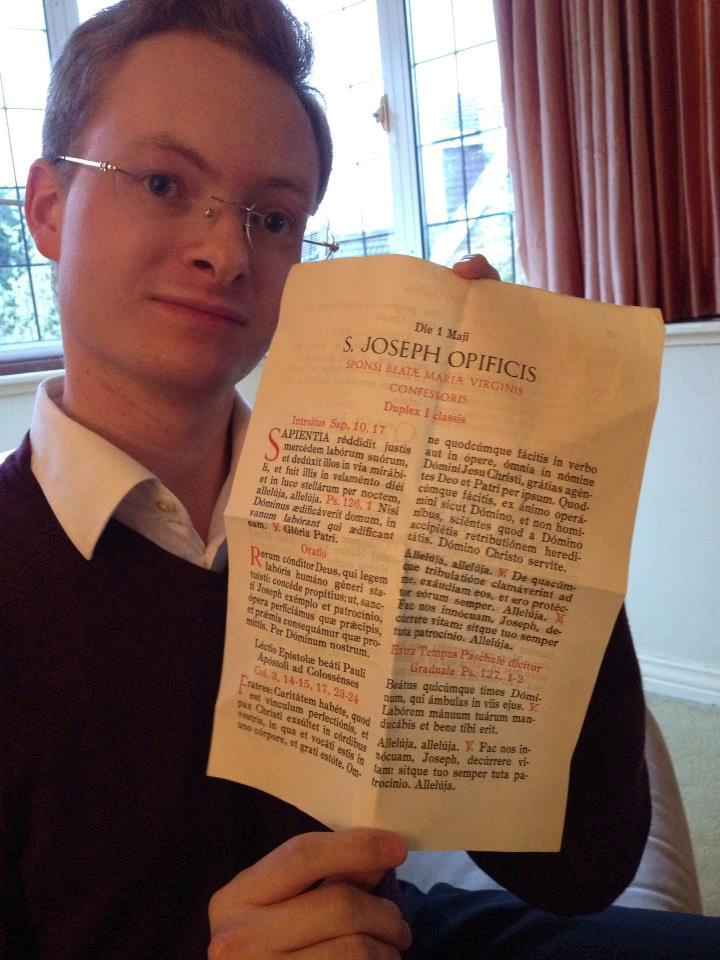 Apologists for the incomplete set of the 1962 books, taking heart from Summorum Pontificum and the example of Benedict XVI's eclecticism, like to propound the idea that the history of the Roman Rite, from apostolic times until the eve of the Second Vatican Council, was one long, uninterrupted sequence of piety and legitimate development and that an unprecedented revolution in liturgical praxis only occurred in the wake of the Second Vatican Council by the application of insidious, anti-Catholic principles to the "true intention" of that synod by a small team of professional liturgists of questionable purposes, who seemingly appeared from nowhere, who hijacked the liturgical constitutions and demolished the Roman Rite attributed to Pius V in its 1962 form which, for the traditionalists, is the culmination of that organic developmental process. I put it to you, readers, that that idea is a load of rubbish and its proponents are disingenuous, faithless, ignorant and themselves of questionable purposes. How, then, can we define "organic development" in liturgical praxis in a way that will achieve universal consensus, if that is possible?

J.R.R Tolkien, writing in 1963, compared the ecclesiastical authorities to a gardener in a treegarth, pruning the tree, getting rid of cankers; and this seems to me a very modern Roman ideal, but with respect to the great man, a fundamentally mistaken one. Tolkien, born between the golden and diamond jubilees of Queen Victoria, witnessed every stage of liturgical reform in the 20th century, and it is only natural that he would have thought this way. But he was also a mediaevalist and it is to the Mediaeval Church that we look for the true principles of organic liturgical development. Indeed, in two main respects the Counter Reformation administered organic development in the liturgy its deathblow, at least for the Roman Rite. The first of these was the surrender of liturgical reform to the Papacy. The second, arguably more pernicious, was the setting up by pope Sixtus V in 1588 of a professional body of bureaucrat liturgists, a centralised team with absolute power of manipulation in liturgical minutiae, called the Sacred Congregation of Rites.

And so from 1568 or 1588 (whichever you prefer, it doesn't matter), instead of the pre-Reformation tradition of regulation of the liturgy in each diocese by the bishop thereof, matters of liturgical pettiness were invariably referred to Rome and episcopal authority over diocesan liturgy was consequently spurned, except in areas influenced by Gallicanism and Jansenism. And so the latter history of the Roman Rite from the late 16th century was one of liturgy dispensed and authorised by the highest ecclesiastical authorities rather than a true continuation of what had historically been the case, that is liturgical development at the local level with deference to provincial synodical decrees. The Counter Reformation was a truly Protestant one in the liturgical sense and this former notion of liturgical regulation was synthesised in the encyclical Mediator Dei, in which Pius XII stated:

"...it is perfectly correct to say, lex credendi legem statuat supplicandi - let the rule of belief determine the rule of prayer...From time immemorial the ecclesiastical hierarchy has exercised this right in matters liturgical. It has organized and regulated divine worship, enriching it constantly with new splendour and beauty, to the glory of God and the spiritual profit of Christians." (Mediator Dei, § 48).

This is not only the complete opposite of the historical Truth it is a theological heresy, and an heresy committed by the "infallible" magisterium that set the scene for the destruction of the rites of Holy Week and other grievous reforms that culminated in the liturgical books of 1962. Is this what passes for "organic development" to a traditionalist? Because I can point to several instances in the latter history of the Roman Rite, even before Pius XII set in stone that liturgical heresy, that demonstrate that the "infallible" magisterium has indeed erred, out of malicious contempt or egregious incompetence, in matters liturgical. So, applying Tolkien's own ideal of the gardener in the treegarth who tends the trees, let us look at these instances of contempt or incompetence in the Roman Rite and judge for ourselves whether they are tested by the yardstick of "organic development."

Was it contempt or incompetence for Urban VIII to render the antient hymns of the Breviary into pseudo-Classical Latin? Is Alto ex Olympi vertice evidence of organic development? Was it organic development that these hymns were not (partially) restored, with their beauteous tones, until the reforms of Paul VI (reforms so despised by the traditionalists)?

Was it contempt or incompetence for Leo XIII to abolish the Blessing of the Waters on Epiphany Even in 1890? Was it organic development for this antient rite, which called to mind Christ's Baptism in the Jordan, to be reduced to a simple blessing of holy water against malevolent spirits?

Was it contempt or incompetence for Pius X to establish a commission to destroy the antient Psalter arrangement and in the process cheaply discarding some of the most antient features of the Roman Rite, such as the Laudate psalms at Lauds? Was it organic development for the Sundays to suddenly "go green?" Was it organic development for Pius X to obscure the distinction between Sunday and festal offices?

Was it organic development for Pius X to move Corpus Christi to the nearest Sunday and then three weeks later to move it back to the Thursday after Trinity? (Treatment which, ironically, one hundred years later the traditionalists were always deft to calumniate their local bishops for!)

Was it organic development for Pius XII to establish a Commission for the General Liturgical Reform in 1947?

And so on and on, and on, in an endless cycle of arbitrary changes that receive papal approval and then become "living tradition." Now some traditionalists have some fantastical notion that these evidences are competent, legitimate changes by high ecclesiastics whom God has appointed who, with pious travail and apostolic labour, work round the clock under the inspiration of the Holy Ghost to approve a pristine rite worthy to be followed that comes intact from God, and carried to the four corners of this world by the Angels themselves. Except, of course, until the Council! Then, O Woe! everything suddenly changed! Organic development came to an abrupt end! And here the pestilential Society of Pius X are to blame. Let us forget for a moment that traditionalism itself is an artificial construct and that traditionalists, in their adherence to the liturgical books of 1962, are bound to the conditions that render Tradition impossible, Roman Catholic traditionalism lost all credibility when it took to the poisonous hermeneutic advocated by the $$PX that the liturgical revolution began after, and as a result of, the Second Vatican Council, thereby shamefully abandoning the advocacy and legacy of their forebears in the 1960's who argued the opposite and who rightly loathed, despised and abominated the 1962 books. Do you think that Evelyn Waugh would have admired Marcel Lefebvre?
Before the expulsions of the "Naughty Nine" from the $$PX in 1983 (because of their adherence to pre-1962 liturgical praxis), and the subsequent decree Quattuor Abhinc Annos, traditionalists everywhere (except in a few sundered chapels in the $$PX) were happily, rightly, doing pre-1962 and arguing for their cause on grounds of immemorial custom. Since the negotiations between the $$PX and Rome, however, there has been a round-about turn and complete inversion of the traditional resistance. Where before the traditionalists were, in a certain sense, dissident and openly rejected the reforms of Pius XII and Paul VI, at least in the last ten years they were Rome's most ardent sycophants; a sycophancy which became nauseating during the pontificate of Benedict XVI and has now turned into a kind of passive-aggressive contempt in the happy reign of good ol' Francis, a man who by all appearances couldn't give a damn about liturgy.

But didn't they all go on about Benedict XVI! He only had to don a floral cope and a bit of lace and it was "living tradition," "brick by brick," and don't let's forget "organic development" in action. Never mind the rite itself and that these affectations were all arbitrary, inconsistent and in some respects aliturgical! But I think it's telling that this "doctor of the liturgy" never once celebrated the "extraordinary form" publicly, nor ever wore the papal tiara, and celebrated the rite of Paul VI more in Italian than in Latin.

But to return to the question of "organic development," essentially the history of liturgy-by-decree since the 1570's disproves this whole concept and whether or not you attribute malice, incompetence or the exercise of "apostolic" authority for its own sake to that culture of legal positivism is irrelevant. To put it crudely, the whole system has been buggered for centuries. Dr Joseph Shaw once defined traditionalism as the desire of faithful Catholics to live in organic continuity with previous generations of Catholics. Fair enough, then I too am a traditionalist; yea, and more than the proud ones with their obnoxious rite! Evelyn Waugh was a traditionalist; so too was Tolkien, but they do not speak for modern generations of traditionalists and can only be made to by retrospective appropriation. Waugh had the 1962 books in mind when he spoke of the "triumph of the liturgists." Tolkien had the the Pacelli Palm Sunday service in mind when he complained that "the antient form, so long established, would never be seen again," (I went to great lengths to uncover that unpublished letter from March 1956).

I entreat you all earnestly to forever put aside the liturgical books of 1962 as deliberate policy. They have proven to be divisive in the past, even before I was born; they have proven divisive in my personal experience, and they will prove divisive whithersoever they go. They are bethought of an agenda of systematic reform and destruction; they have no liturgical or aesthetic worth and they ought to be regarded as an aberration. Put aside this idea of "organic development" up to the Council but no further! Put aside your admiration of the Lefebvrists! They are wayward and the enemies of Christ's Church! And finally, Therefore, brethren, stand fast, and hold the traditions which ye have been taught, whether by word, or our epistle.
Posted by Patrick Sheridan at 9:00 am
Email ThisBlogThis!Share to TwitterShare to FacebookShare to Pinterest