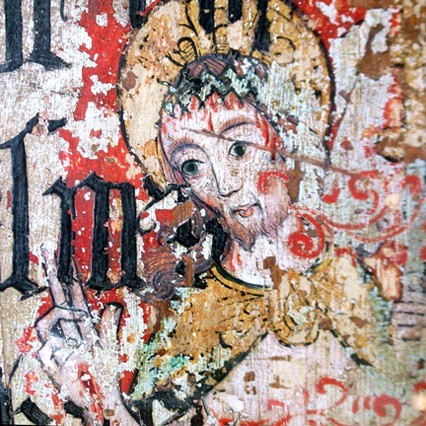 "And I concluded by saying that the Resurrection was the greatest 'eucatastrophe' possible in the greatest Fairy Story - and produces that essential emotion: Christian joy which produces tears because it is qualitatively so like sorrow, because it comes from those places where Joy and Sorrow are at one, reconciled, as selfishness and altruism are lost in Love. Of course I do not mean that the Gospels tell what is only a fairy-story; but I do mean very strongly that they do tell a fairy-story: the greatest. Man the story-teller would have to be redeemed in a manner consonant with his nature: by a moving story. But since the author of it is the supreme Artist and the Author of Reality, this one was also made to Be, to be true on the Primary Plane. So that in the Primary Miracle (the Resurrection) and the lesser Christian miracles too though less, you have not only that sudden glimpse of the truth behind the apparent Ἀνάγκη of our world, but a glimpse that is actually a ray of light through the very chinks of the universe about us." The Letters of J.R.R Tolkien, no.89.

(I encourage you to read all this letter, if you have a copy of the Letters in your homes. And also, on this theme, his lecture On Fairy Stories in which his concept of the Eucatastrophe is elaborated; this can be found in Tree and Leaf).

Tolkien uses similar language to describe the mirth of the host gathered on the field of Cormallen after the fall of Sauron. This is not to be wondered at since this was a letter sent to Christopher Tolkien in 1944, when composition of The Lord of the Rings was well under way. But the victory at the Black Gate, we must remember, was not achieved (nor could have been so) by might in arms, but by weakness, evangelical meekness, "a veil before the eyes of the enemy." This is a resonating theme throughout the legendarium, from Ulmo's words to Turgon that the true hope of the Gnomes cometh from the Sea to Gwindor's words to Túrin in Nargothrond about petty victories, and the barest hope of survival against the lust and terror of the North. Always, the Dark Lord is in ascendancy; always his strength is overmastering and he has a power to corrupt the counsels of his foes and pursue his enemies whithersoever they might go. Yea, so great is his power that the very stuff of which the earth is made is corrupt, so much so that final victory over evil is impossible, even for the Lords of the West; unless God himself should intervene - concepts explored in Volume X of The History of Middle-earth.

This motif of flight, secrecy, preservation and tradition was began during the Siege of Angband; Sindarin Doriath with its girdle of enchantment, the delving of Nargothrond and the uttermost secret of Gondolin. But it was continued in the Second Age during the wars between Sauron and the Elves of Eregion. The forging of the Rings of Power is well known, but their purpose in the mind of the Elves is less so. They were desirous of an anamnesis of the West, or an enhancement thereof. Gimli remarks in Book II of The Lord of the Rings that to the Elves, memory is more like to waking life than among lesser folk, and the Elven Rings were designed and worked to this end. If you consider our own memories of times past, of bliss and of sorrow, they are often fleeting, like the recollection of a dream. But to the Elves it was not so, and this keenness only increased their sorrow and so the Rings were designed to assuage this; to heal the hurts of the world and preserve in reverent tradition much that was in peril against the flowing tides of time. There is something quintessentially liturgical about this; that is if we understand the celebration of the Sacred Liturgy in memorial, traditional terms as opposed to liturgy-by-decree.

To be continued...
Posted by Patrick Sheridan at 8:00 am
Email ThisBlogThis!Share to TwitterShare to FacebookShare to Pinterest